Read on to find out about the members of the 2016 jury for the prestigious Swedish Wood Award. Awarded very four years, this is one of the leading prizes in Swedish architecture. Five people with broad experience in the field of architecture, both at national and international level, have the task of judging the entries.

Karolina Keyzer was City Architect in Stockholm from 2010–2016, after which she founded the architectural practice OKK+. After graduating from KTH Royal Institute of Technology, Karolina worked at various architectural practices, including Ove Hidemark, Rosenbergs and Wingårdhs. At Wingårdhs she was chief architect for projects such as Victoria Tower in Kista. She has also been a member of the editorial team at Trä magazine. 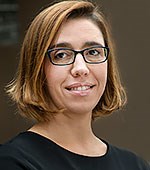 Carmen Izquierdo trained as an architect at ETSAM in Madrid, Spain and has worked in the business for over 20 years, in both Spain and Sweden. In Sweden, she has won the Kaspar Salin Award, the Region Skåne Architecture Prize and the Lund Urban Development Award 2011 for Domkyrkoforum, the visitor centre for Lund Cathedral. Carmen has worked on a diverse range of complex architectural assignments and urban development issues within her own firm and as an employee of other architectural practices. She also spent two years as a guest lecturer at KTH Royal Institute of Technology from 2014–2016.

Rahel Belatchew Lerdell, SAR/MSA, DESA is CEO and founder of Belatchew Arkitekter AB and Belatchew Fastigheter AB. She has previously worked as an architect in Paris, Luxembourg and Tokyo. Rahel teaches at the École Spéciale d’Architecture in Paris and is a guest critic at the School of Architecture, KTH Royal Institute of Technology in Stockholm, as well as being part of the editorial team for Trä magazine. She has previously been a jury member for Stockholm’s Building of the Year, plus the National Wood Awards in France and Latvia.

Tomas Alsmarker, who holds a Licentiate degree and a Master’s degree in civil engineering, has a passion for the art of combining function, economics, beauty and technology. For much of his career, he has kept one foot in academia and one in the business world. Via both his research and his work as a structural engineer, he has been deeply involved in the new developments in wood construction. In 2000, he was appointed associate professor in Wood Design and Technology at Växjö University. At around the same time, he also became the head of the structural engineering department at Tyréns. Since 2013, Tomas Alsmarker has been CEO of Nyréns Arkitektkontor.