Lebanese furniture design in Swedish pine a winner in Dubai

27 May saw the announcement of the winners in the “Swedish Wood Student Design Challenge 2016”, which was initiated by the industry body Swedish Wood in partnership with the American University in Dubai (AUD). The challenge was to create an innovative and functional item of furniture for a hotel lobby using Swedish pine and spruce.

This second Swedish Wood Student Design Challenge was organised by Swedish Wood in partnership with AUD and the prize is a study trip to Sweden in June.

“The Middle East and North Africa is an important region for Swedish exports of wood products. The design challenge in Dubai is a way to educate tomorrow’s designers in the region about Swedish wood, very much a material for our age due to its eco-friendly and natural profile. The design students also gain practical experience of the material’s high quality, strength and versatility,” says Charlotte Dedye Apelgren, Director of Interior and Design at Swedish Wood.

Since March this year, 13 teams of students have been working intensively on the project, which is part of their design course at AUD. Three teams were then selected to manufacture their furniture in Swedish pine and spruce which Swedish Wood donated to the university. On 27 May, a jury comprising representatives from AUD and Swedish Wood, plus an international design expert, announced the winning entry, a table and seating in Swedish pine inspired by New York and the Brooklyn Bridge.

In explaining its decision, the jury describes the winning entry as a design that attracts attention by appearing to challenge the laws of gravity, while also demonstrating the strength of wood to great effect. The students have done a great job in creating furniture for a hotel setting, since the large proportions of the design suit large open environments such as entrance halls and hotel lobbies. In addition, the furniture is multifunctional, with places to stand and sit, plus storage. The jury also appreciated the aesthetic values of the furniture.

“The winning furniture stylishly illustrates the different impact that pine can make, depending on whether it’s used unpainted or treated with pigment. The contrast between the dark and light surfaces is here used to emphasise the challenging nature of the design,” comments Charlotte Dedye Apelgren.

“This competition, organised by Swedish Wood and AUD, is a big thing for us. It’s been an exciting experience that has left us very positive about Swedish wood. We like the strength and the colour of the material,” says Jessica Abou Haidar.

Both Jessica and Christina see the win as a great opportunity for the future.

“This is the first time we’ve designed anything together, but after this project we can see ourselves forming a joint design company in the future,” relates Jessica.

The winning entry Table and seating inspired by New York and the Brooklyn Bridge. The design partly symbolises the sisters’ relationship with each other, as two different people who are woven into each other’s lives. The furniture is made from pine, with part of it stained dark brown. Functionally, it serves as a bookshelf or display stand, as a bar table on one side and as seating on the other.

The entry in second place Seating in Swedish pine and spruce inspired by London. Supplementary material: steel frame in black that recalls the typical black railings and gates in Notting Hill. The box-shaped section is used as a planter.

The entry in third place Shelving inspired by Liberty Tower in Tehran, can be assembled without any glue or screws and can be taken apart and flat-packed. The shelving unit is intended as a bookshelf in a lobby, as a room divider or as a towel and newspaper rack in a spa. The unit can also be rotated and is fully stable in every direction. Built in Swedish spruce. 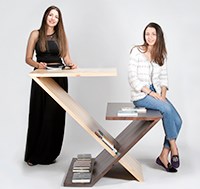 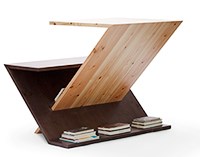 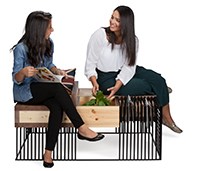 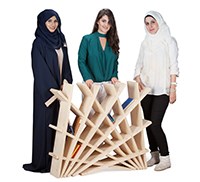 The winning students Jessica Abou Haidar and Christina Abou Haidar together with the jury members, staff from AUD and the Counsellor Pia Roed from the Embassy of Sweden.
Download