The forest and sustainable forestry

Swedish forest has to meet a number of different demands. Despite making up less than one percent of the planet’s forested land, it makes Sweden the world’s second-biggest exporter of pulp, paper and sawn wood products. Sweden’s total land area covers 40.8 million hectares, while Swedish forest comprises 22.5 million hectares of productive forest land. Growth is greater than the amount felled, and has been for the entire 20th century onwards. Annual growth stands at around 120 million cubic metres growing stock, solid over bark (m3sk), and each year around 90 million m3sk of that growth is harvested. See table 4, page 11, for explanation of abbreviations. In other words, the amount of forest in Sweden is constantly growing year on year, with the total volume of wood amounting to over 3 billion m3sk! In less than 100 years, Sweden’s forest assets have doubled.. 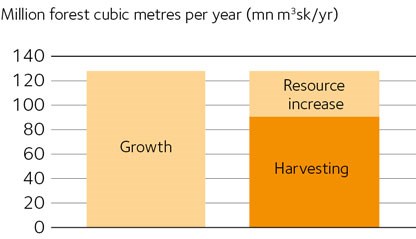 Fig. 4  Growth in Sweden is greater than harvesting

Almost 70 percent of Sweden’s land area is covered in forest, and that figure has remained stable for a long time. As much as 83 percent of Sweden’s forest land is coniferous forest, with mixed forest accounting for 12 percent and pure broadleaf forest 5 percent. The volume of wood comprises 40 percent spruce, followed by 39 percent pine, then 13 percent birch and 8 percent other broadleaf trees (see fig. 5). The distribution of tree species is not the same everywhere in the country. Pines cope in dry and poor soil compared with spruces, which thrive in healthy, moist and more nutrient-rich soil. The closer you get to medium quality soil, the greater the mix of different tree species. Birch, aspen and alder can be found across the country, while broadleaf trees such as oak, beech, elm and ash only grow south of the Dalälven river. 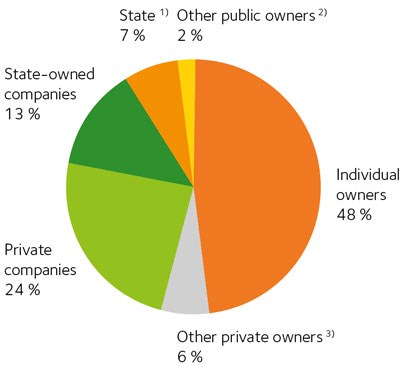 What we use the forest for

Almost all the forest in Sweden can be defined as managed. Only the northernmost mountain regions have areas of virgin forest, areas that have not been affected by agriculture or silviculture. These are called natural forests.

Of the forest harvested in Sweden, around 47 percent goes to sawmills, 45 percent to the pulp industry in the form of pulpwood, and 8 percent becomes firewood, poles and so on. Forest raw material can also be found in a wealth of products that one might not ordinarily associate with wood, such as food packaging, clothing, cosmetics and medicine. A wide range of exciting projects is currently under way, researching new uses for forest raw material. With development driven by market demand, the list of new high-tech materials, products and applications based on forest raw material is growing rapidly.

The concept of social sustainability encompasses issues such as indigenous populations, workers’ rights, recreational issues and opportunities for society, at both local and national level, to live off its forestry in the long term.

It is vital that the forest is looked after properly, and regeneration plays a major role in this.

Tables 2 and 3 show how a forest owner’s objectives and view of the future can affect the management of a pine forest on medium quality soil in mid Sweden. The timescale is somewhat shorter in the southern part of the country (60–80 years) and as much as double in the far north (up to 150 years). The quality of the wood can be influenced by the choice of regeneration method, and through silviculture measures such as cleaning and thinning. The branches will usually be bigger in sparse stands than in dense stands. A forest stand is an area of forest of similar age and composition that is managed and harvested as a single unit.

The forest’s growth is measured in site quality, which describes the fertility of the forest land, or the land’s natural wood producing capacity per hectare (10,000 m²) per year. The site quality is determined primarily by the area’s soil, climate, moisture conditions and exposure. Site quality is expressed in cubic metres growing stock, solid over bark (m3sk) per hectare per year, and varies across Sweden, with a rate of 2–3 m3sk/ha/yr in inland Norrland, 5 m3sk/ha/yr in Gästrikland and 11 m3sk/ha/yr in Skåne. The site quality can differ greatly within the same area, so these figures are averages. The higher site quality in southern Sweden is due primarily to more productive soil and a longer growth season in a milder climate.

m3sk = growing stock, solid over bark, meaning the volume of the whole tree above the stump cut, including bark.

m3to ub = volume of a cylinder calculated as the top diameter (under bark) times the log’s length.

The conversion factors can vary slightly, but these are averages that generally work well.

Sweden’s sustainable forestry is subject to legislation that balances production and environmental objectives. Harvested forest must be regenerated either through planned planting or by leaving trees that naturally produce seeds and new seedlings, known as natural regeneration. In addition to forest-related legislation, there are also voluntary international forest certification schemes, under which sustainable forestry is verified through third-party certification. The two schemes that operate in Sweden are FSC and PEFC.

FSC certification is issued by the Forest Stewardship Council, an organisation with international members including big names such as the World Wide Fund for Nature (WWF) and Greenpeace. FSC works to promote environmentally aware, socially responsible and economically viable use of the world’s forests. PEFC stands for Programme for the Endorsement of Forest Certification Schemes, and this is also an international, non-profit organisation. The aim of the Swedish PEFC’s forestry standard is to develop economically sustainable and valuable forest production, while also protecting biodiversity, cultural heritage and social and aesthetic values.

Almost 70 percent of Sweden’s productive forest land is certified to these standards (see fig. 8). In order to ensure that no one uses wood from illegally harvested forests, the EU has voted on a law against trade in such wood, known as the European Timber Regulation (EUTR). 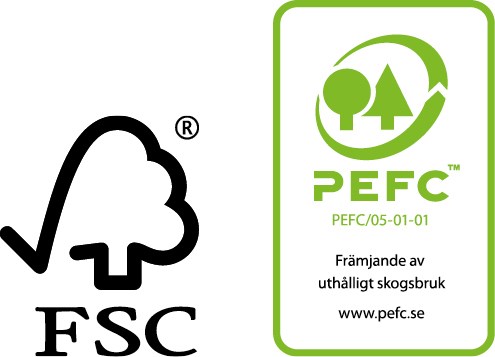