Wooden bridges can be built to take pedestrian and cycle traffic, as well as road traffic. Advances in wood material development and construction methods mean that bridges in wood can now meet all the requisite standards for modern bridges. Wooden bridges are often competitive for moderate spans, and they can be built to fit into most environments.

Bridge structures are a prime example of the technical and economic potential offered by the technique of building in wood. With the technique now so well established, wooden bridges are a highly competitive option for both pedestrian bridges and road bridges. Prefabrication in a factory reduces the work on site to a single installation lift. A wooden bridge can be prefabricated, transported and installed on site in sections that are practically complete, with just the road paving to add. As well as reducing the dependency on access to labour on site, the actual installation of the deck is much faster than for other construction alternatives. The competitiveness of wooden bridges would increase further, if projects fully took into account the cost of disruptions to traffic that occur when building road bridges such as motorway viaducts.

In the distant past, wood and stone were the only materials available for building bridges. In forested areas, wood was an obvious choice. An early solution was to simply push trees over in order to cross rivers or ravines. Gradually, trunks started being used more systematically to cross obstacles in the terrain. Over time, the methods for building bridges became increasingly sophisticated, and the nature of the bridges changed from purely functional objects to fully designed structures encompassing aspects of technology, craft and art. Wood took on great importance as a versatile construction material that was available almost everywhere.

Thanks to its excellent strength properties, wood has been one of the most widely used construction materials for bridges through the ages.

From wooden pilings to stone piers
Several thousand years ago, wooden bridges were built all over the world, not least by the Persians, Greeks, Romans, and Chinese. In 55 AD, Julius Caesar had a bridge built over the Rhine at Neuwied in just 10 days to get the Romans into Germany. The bridge was around 140 m long, with a deck about 5–6 m wide to allow two lanes of traffic. It was paved with earth and gravel. All the components must have been prefabricated for such a large bridge to have been built in such a short space of time. The advantage of this type of bridge was that it was quick to build using relatively simple means. The disadvantage was that it was low-lying and raised on pilings, so meltwater and floods are likely to have damaged it on a regular basis, making it very high maintenance. In more important locations, the pilings were therefore replaced with stone piers spaced further apart, with trussed wooden arches or braces erected between them. This design put the wooden structure above the normal highwater mark for greater protection, whilst in addition allowing boats to pass under the bridges.

Technical advances and new materials
Many wooden bridges were built from the Middle Ages up until the 19th century, and various types of arches and trusses were developed. The 18th century also saw the advent of covered bridges, i.e. bridges with roofs, both in the USA and in Europe. A large number of roads and railways were built in North America in the 19th century, and wooden bridges with large truss structures became commonplace. When the railways were at their peak, there were several hundred kilometres of rail bridges built in wood. As technology and traffic changed over the latter part of the 19th century and into the 20th century, wood became less dominant as a bridge building material. It was replaced first with steel and later with concrete. There are, however, a number of countries that have continued to build bridges in wood.

Central Europe, particularly Switzerland, has a long-standing tradition of building wooden bridges. There are more than 200 covered bridges, many of them medieval, that have been carefully conserved, and it is the fact that they are covered that lies behind their preservation. The oldest example is thought to be Kapellbrücke in Lucerne, which was built in 1333 and in the middle ages formed part of the city’s fortifications. Even today, almost 700 years later, this bridge is still used by pedestrians. Parts of the bridge were damaged in a fire in the summer of 1993, but it has now been fully restored.

Longer spans
The development of glulam in the 20th century meant that large wooden beams could be manufactured, which allowed for longer spans on beam bridges. In the 1970s, Canada developed a new technique using cross-braced slab bridges in wood. This technique has made it possible to build bridges for heavy road traffic with the same kind of asphalt paving that is used on concrete decks. Cross-braced slab bridges are now built in many countries around the world.

In the Nordic countries, there was a concerted effort in the 1990s to develop wood bridge construction and introduce cross-braced slabs. At the time, Norway and Sweden mainly had small, simple wooden bridges and a number of historical examples. Finland had been continuing to build wooden bridges into the modern era, particularly glulam beam bridges. Having fallen out of favour for a long time, wooden bridges have now once again become a common sight in Sweden and other Nordic countries. 1994 was the year that the Swedish Road Administration’s code of statutes first included technical requirements for wooden bridges. Initially, these related to pedestrian and cycle bridges, but now road bridges in wood are also permitted. As such, the official technical requirements for bridges cover wooden structures alongside structures in concrete, steel and aluminium. 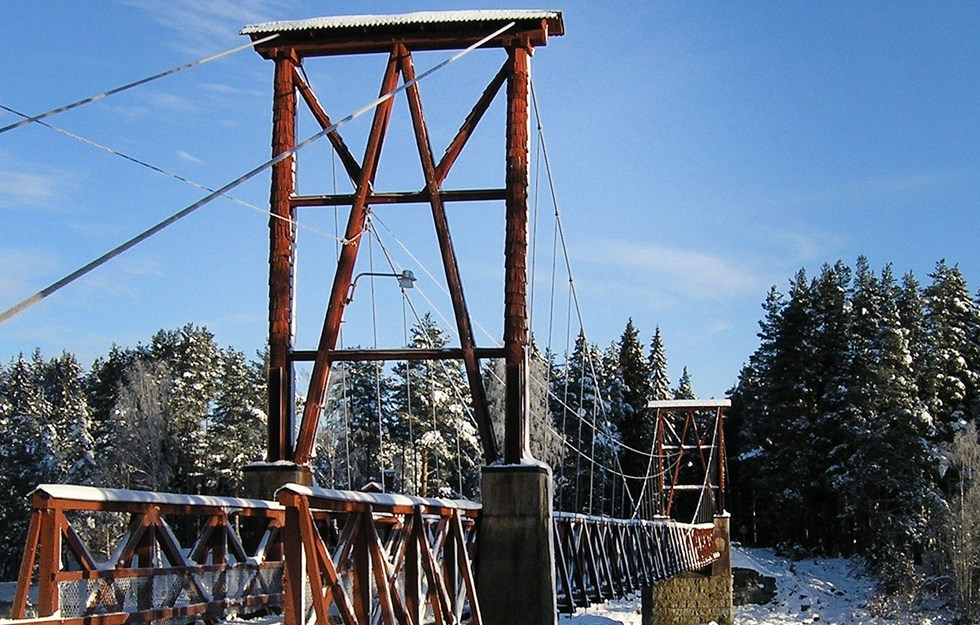 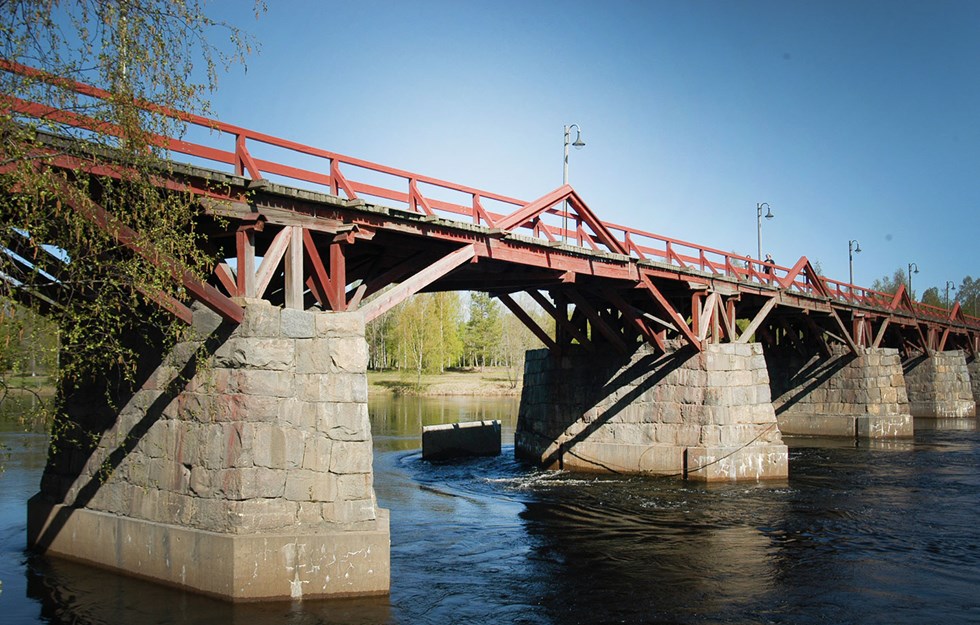 The key task of a bridge is to connect two points that are separated by an obstacle. Thanks to its excellent strength properties, wood has been one of the most widely used construction materials for bridges through the ages. It is a light material that can nevertheless handle considerable compression and tension stresses. Recent years have seen the development of new methods for building wooden bridges. With the increasing awareness of the material’s properties, the trend is for wood to be used in combination with other materials and with more appropriate connections.

A bridge qualifies as a wooden bridge if it has a superstructure in wood, with the main load-bearing function taken up by beams or slabs, made primarily from wood. A wooden bridge will also include steel elements and fixings for joining the wooden components. The wooden superstructure can also be combined with structural elements in other materials. These may include concrete foundations, supplementary supports such as steel piers or suspension structures with cables and steel hangers. Modern wooden bridges are currently used in Sweden as pedestrian and cycle bridges and as road bridges.

Wooden bridges for pedestrian and cycle traffic
New bridges in wood are ideal for pedestrian and cycle traffic. Wooden bridges are light compared with other bridges. This means that wooden bridges for small traffic loads can have more slimline designs than equivalent bridges in concrete in particular, where the weight of the material makes up a large part of the load. Such slim designs mean that requirements to limit deflection are often specified for a wooden bridge. Light and slim structures also have to be designed to take account of dynamic loads and integral swaying. A requirement limiting disturbing swaying for pedestrians may be specified for long pedestrian bridges.

Aesthetics and design
The appearance of a wooden bridge is often important, since bridges can become a dominant feature in the landscape. The tensions in a bridge are often quite obvious, and a well designed bridge can attract attention and showcase wood as a construction material. For the optimum interplay between form and function, architects need to understand the static system, while structural engineers have to be aware of the aesthetic aspects. The choice of the most suitable structure depends on the specific site conditions, including the free span, clearance and type of traffic. The bridge also has to be adapted to the terrain, connecting roads and the surrounding buildings and landscape. It should be attractive both to those using the road and to those who see it from the surrounding area. This makes it important to consider not only the overall shape, but also the design of the details.

Wooden bridges can easily be adapted to the particular conditions that apply in each case. Lines, surfaces, shapes and colours can be used in various ways to achieve an attractive wooden bridge. Proportions and rhythm can also give the bridge its character. Wood can readily be designed to meet different functions and requirements. An open bridge in wood may be designed so that its load-bearing components are clearly on display, whether they are arches, braces or trusses. Pylons for cable-stayed bridges and suspension bridges can also be played with in terms of shape, proportion and cross-section. If the height of the pylons is taken beyond what is structurally necessary, for example, it can lend the bridge a greater elegance.

Protection against wind and weather
Wooden structures that are kept dry have a long life, and the easiest way to achieve this with wooden bridges is to give them a roof that keeps the rain away from the load-bearing structure. Many of the old wooden bridges preserved in Switzerland are covered. In many cases, however, a roof on a bridge is not possible, for example due to lack of clearance, or appropriate, perhaps due to the surrounding environment or the client’s wishes. Bridges with a roof have a very particular look that is certainly uncommon in a Swedish context. Most modern wooden bridges are open instead, with no roof. Nowadays, they can be effectively protected against weather and wind using other techniques. To ensure a long service life, load-bearing components may need to be protected with cladding, which conceals part of the structure and gives the bridge a different look. Cladding should therefore be incorporated into the design and made aesthetically attractive.

Most wooden bridges are surface treated to give the wood material some protection against wind and weather, but also to give the wooden surface a particular colour. The colours should, however, be tailored to the surroundings and to the design of the bridge. Colours can additionally be used to accentuate or conceal structural elements of the bridge and should therefore be considered on both a small and large scale. Lighting can also be used to highlight different parts of the bridge in the dark.

Bridge details
Working on the details is particularly important for pedestrian and cycle bridges, whose users move slowly and get up close to the bridge. The balustrade is thus an important part of a bridge’s design, and the balustrades and handrails are therefore subject to functional, static and aesthetic requirements. These parts are also heavily exposed to wind and weather, and this should be taken into account in the planning. 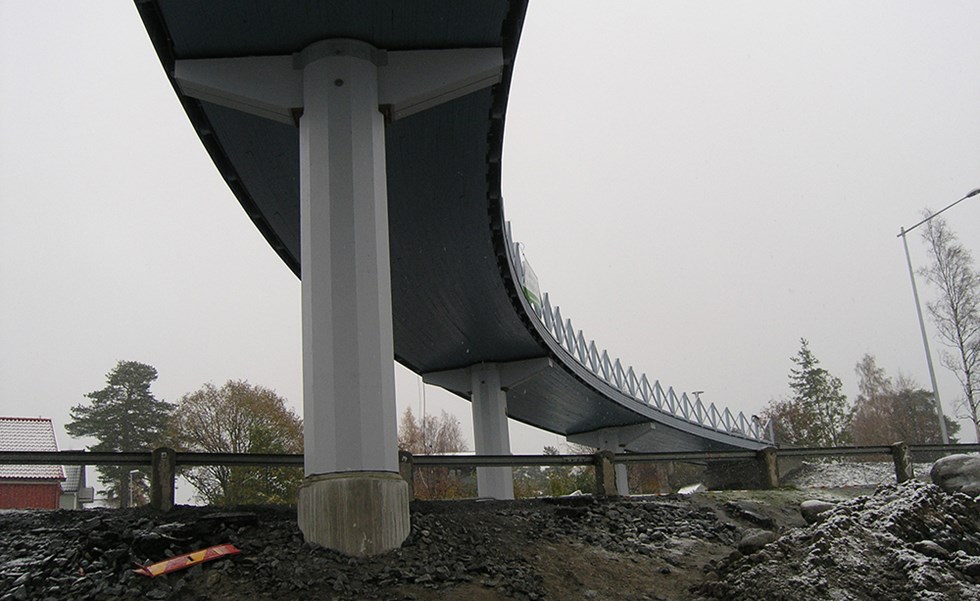 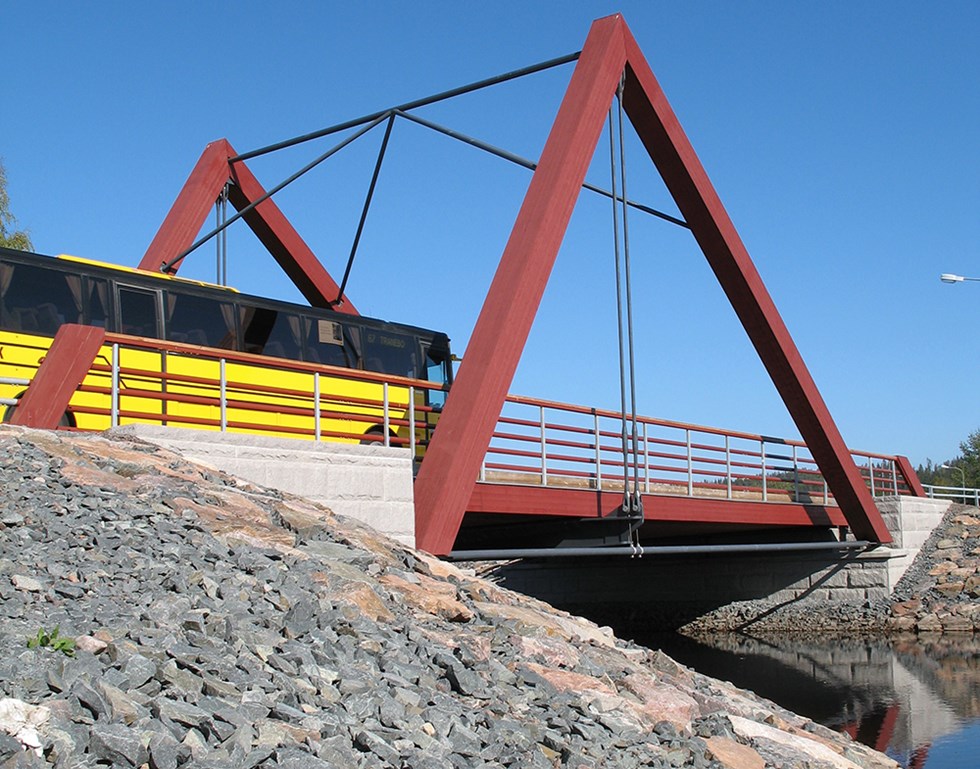