Many wood products for construction purposes are made from wood that has been bonded together. They may also contain other wood products or other materials such as metal. The wood may be bonded with many different types of glue and using different methods.

Glulam as a structural frame is common in halls and public buildings. In recent years, it has also become more common in multi-storey buildings. Bridges are another key application. The use of glulam is also growing in low-rise housing.

Glulam structural elements are manufactured industrially under controlled conditions. Long lengths can be produced with the help of finger-jointing technology. The basic engineering principle is that lengths of finger-jointed wood laminates are stacked and bonded together to form large structural elements. The wood fibre is oriented along the length of the glulam products. The size and length of the glulam products is limited firstly by the transport options and secondly by the glulam manufacturer’s production premises and equipment.

Swedish glulam is produced in line with the standard SS-EN 14080 and must be CE marked.

The laminate thickness for straight glulam products is 45 mm. Glulam products, whatever the number of laminates, are made to strength class GL30 in Sweden.

Glulam manufacture demands considerable precision not least in milling the finger joints, preparation and application of the glue, compression force and compression time. Ongoing checks are made to ensure that the glulam products maintain a constantly even and high quality. These checks involve sample blocks regularly being taken out of production for testing of their strength and other performance parameters. The glulam manufacturers are third-party certified by an accredited certification body.

Glulam is primarily a construction material, making strength, stiffness and durability the key properties. Glulam products therefore do not generally have the same wood quality and surface finish as interior joinery and furniture. In most contexts, the standard products meet normal appearance requirements.

Spruce (Picea abies) is the main wood used in Sweden for glulam manufacture, but pine (Pinus sylvestris) is also used in special cases, for example if the glulam is to be made from pressure treated wood.

Glulam is made using synthetic adhesives that are documented to have high strength and durability under a sustained load, and only those of which the industry has long practical experience. The requirements are set out in the standard SS-EN 14080 and in sources such as sub-standard SS-EN 301, which defines two classifications of adhesive, Glue type I and Glue type II. Glulam manufactured using Glue type I can be used no matter what the surrounding climate (Climate class 1–3 under Eurocode 5), while use of Glue type II is limited to structures that are protected from the elements (Climate class 1 and 2 under Eurocode 5). For durability reasons glulam must, however, be protected from the long-term impact of moisture, precipitation and sunlight. In Sweden, glulam is almost exclusively manufactured using MUF glue (Melamine-Urea-Formaldehyde), which meets the requirements for Glue type I. The proportion of glue in glulam is almost negligible – less than 1% by weight.

The high strength and stiffness of glulam enables large, unsupported spans to be constructed. In construction timber, the strength of an individual plank is determined by its weakest point – usually at a large knot, finger joint or cross grain. The difference in strength between different planks can be substantial. Glulam elements are, on average, both stronger and stiffer than an individual plank of the same dimensions. This is due to the lamination effect, which can be summarised as follows:
A glulam element comprises a number of laminates of construction timber. The risk that strength-reducing defects in several laminates will end up in the same place is very small. The laminate wood is also strength graded. In combined glulam, the strongest laminate wood is placed in the outer laminate zones, where the stresses are normally greatest.

Load-bearing capacity in a fire depends on the dimensions of the structure, how much of the load capacity is being used and the structural design of the connections.

Glulam is a flammable material but, due to its large and homogeneous cross-section, it is relatively stable during the initial phase of a fire. Load-bearing capacity in a fire increases with larger dimensions. Glulam is hard to ignite and burns slowly. The development of heat during a fire is often critical in determining whether the fire is going to take hold or die out. The carbon layer that forms on the surface of glulam in a fire protects the inner parts and helps the glulam to retain its load-bearing capacity even as the fire progresses. Glulam burns slowly at an almost constant speed (approx. 0.6–1.0 mm per minute) due to the carbon layer that forms on the outside of the glulam element. Burning glulam only generates moderate amounts of smoke.

The appearance grade Planed on all faces, no surface repairs is a standard stock grade. The sides are finished using a plane or similar tool. Pitch pockets, small knot holes and chips may occur. Visible edges should be bevelled. The standard stock grade is recommended for visible use, for example in roof beams for sports halls, commercial premises, schools and low-rise housing.

Straight glulam elements are generally stocked in lengths of up to 12 metres in a strength class, Glue type I, appearance grade Planed on all faces, no surface repairs, and untreated.

Laminated Veneer Lumber (LVL) is a construction material that is closely related to glulam. It is industrially engineered in the form of elements with a rectangular cross-section. The elements are used primarily as beams or panels in load-bearing systems. They comprise a large number of pine or spruce veneers glued together. To increase the stiffness and load-bearing capacity, the veneer layers are oriented differently depending on whether the material will be used as a beam or a panel. The panel has alternate veneers laid at 90 degrees, while the veneers in a beam run along its longitudinal axis.

For applications and dimensioning, refer to the manufacturer’s instructions and product information. LVL must be CE marked.

Various forms of lightweight joist and beam have been developed. The most common type is an I-beam or joist with construction timber or LVL flanges capping a construction board or OSB web.

For applications and dimensioning, refer to the manufacturer’s instructions and product information. Lightweight joists and beams must be CE marked.

CLT gives the appearance of a “sheet material” and is made up of boards or planks, with alternate layers rotated 90 degrees. This creates a dimensionally stable structural component with good load-bearing capacity in relation to its weight. Using large CLT elements enables rational, efficient assembly, which keeps construction times short. Cross Laminated Timber is also known internationally as X-Lam.

For applications and dimensioning, refer to the manufacturer’s instructions and product information.

Wooden wall and floor units are produced in many different ways. They usually make use of wood in the form of beams and joists. The low-rise housing sector often uses various forms of lightweight beams and joists.

Wood-based construction units are often designed as open systems, which means that units from different manufacturers can be combined. Similarly, prefabricated units can be combined with components built on site.

Traditionally, a floor structure will comprise beams with a centre spacing (c) of 600 mm, lined with load-bearing floor panels on the top and a ceiling structure on the underside. For sound insulation purposes, the space between the beams is filled fully or partially with insulation.

Floor structures in high-rise buildings use units that are solid or semi-solid. In the solid floor units, the whole of the load-bearing cross-section comprises cross laminated timber (CLT). This basic structure can then, depending on what it will be used for, have a floor structure added on the top and a ceiling structure added on the underside. In the load-bearing part, the solid wood is glued or dowelled together.

In the semi-solid floor units, the load-bearing beams are closer together than is traditionally the case, with insulation in between. 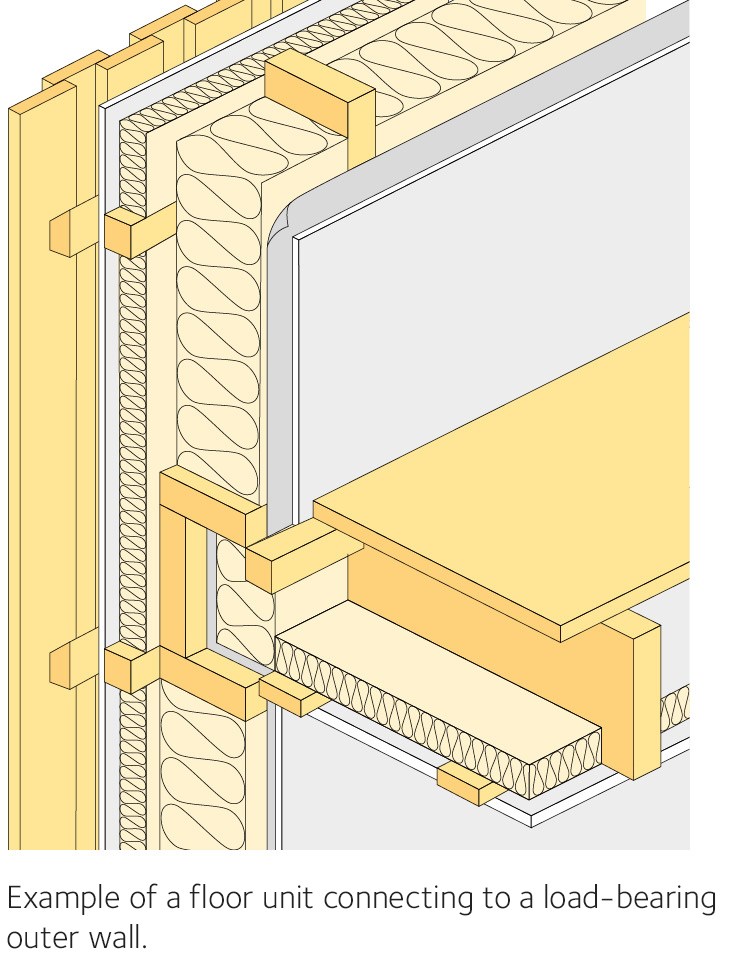 Traditional components for walls and roofs are usually made from joists or beams of construction timber with a centre spacing of 600 mm or 450 mm. These components are supplemented in various ways, depending on the use.

When constructing solid walls and roofs, prefabricated units are available, and these are then added to on site. They are made from wood in one or more layers. Wood in one layer is similar to the solid floor units and is glued or dowelled together. Multi-layered wood is usually cross laminated timber (CLT) with anything from three to nine layers. Such wood can be made from different wood species and with different surface qualities and finishes. The components can be manufactured to a maximum of 3000 mm wide, 12,000 mm long and 300 mm thick. The components can be cut and profiled as required. 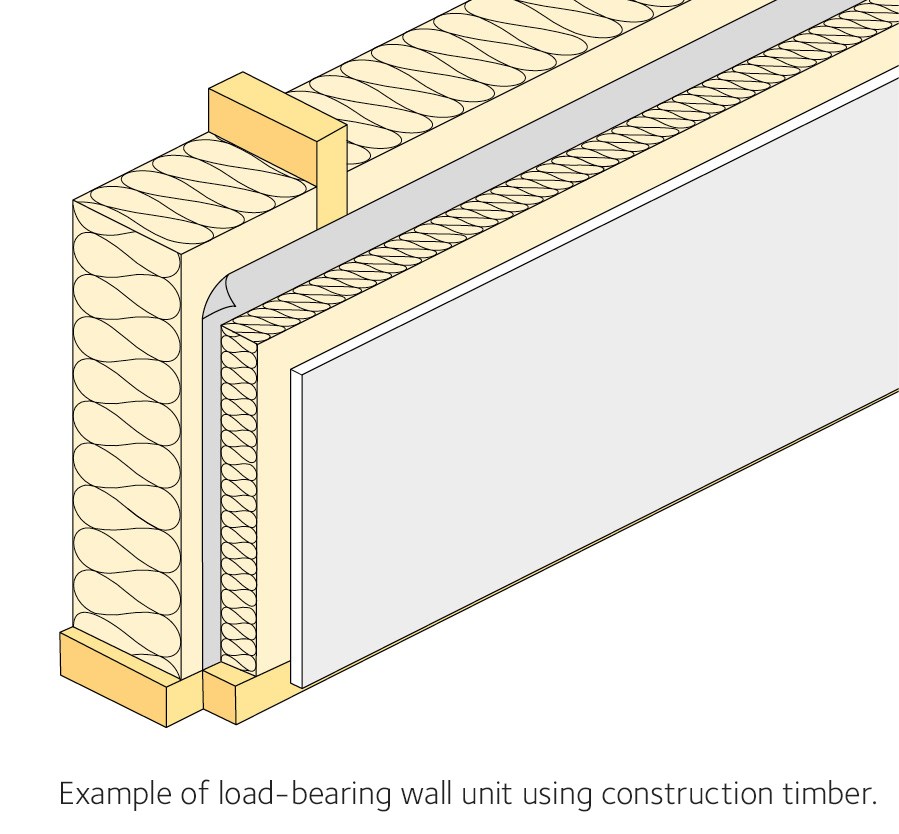 Roof trusses are now usually produced industrially as finished units and must be CE marked according to the standard SS-EN 14250. The wood used is construction timber, mostly 45 mm thick.

The parts are joined together with metal toothed nail plates, which are pressed into the wood at the joints. All the wood is on the same plane, which makes insulation work easier for the building manufacturer or on the construction site.

The technique can be used to prefabricate every type of load-bearing wood component. A calculation program has been developed for dimensioning, in line with Eurocode 5.

Roof trusses should be handled and stored vertically, well protected from precipitation and ground moisture.

Roof trusses can also be put together on the construction site, with design calculations based on Eurocode 5. Materials for roof trusses, such as construction timber, nail plates and structural wood screws or nails must be CE marked.

Sheathing panels are produced in a factory for greater efficiency when boarding out a roof. The wood for the sheathing panels must be G4-3 or better in line with SS-EN 1611. The thickness is 17, 20 or 23 mm. The length of the sheathing panels is tailored to standard roof truss centre spacing, c 1200 mm, i.e. 2400, 3600 or 4800 mm. The width is normally 510–550 mm. One or two faces of the sheathing panel are grooved, or one face is grooved and the other sides are planed. Other dimensions are manufactured on request. 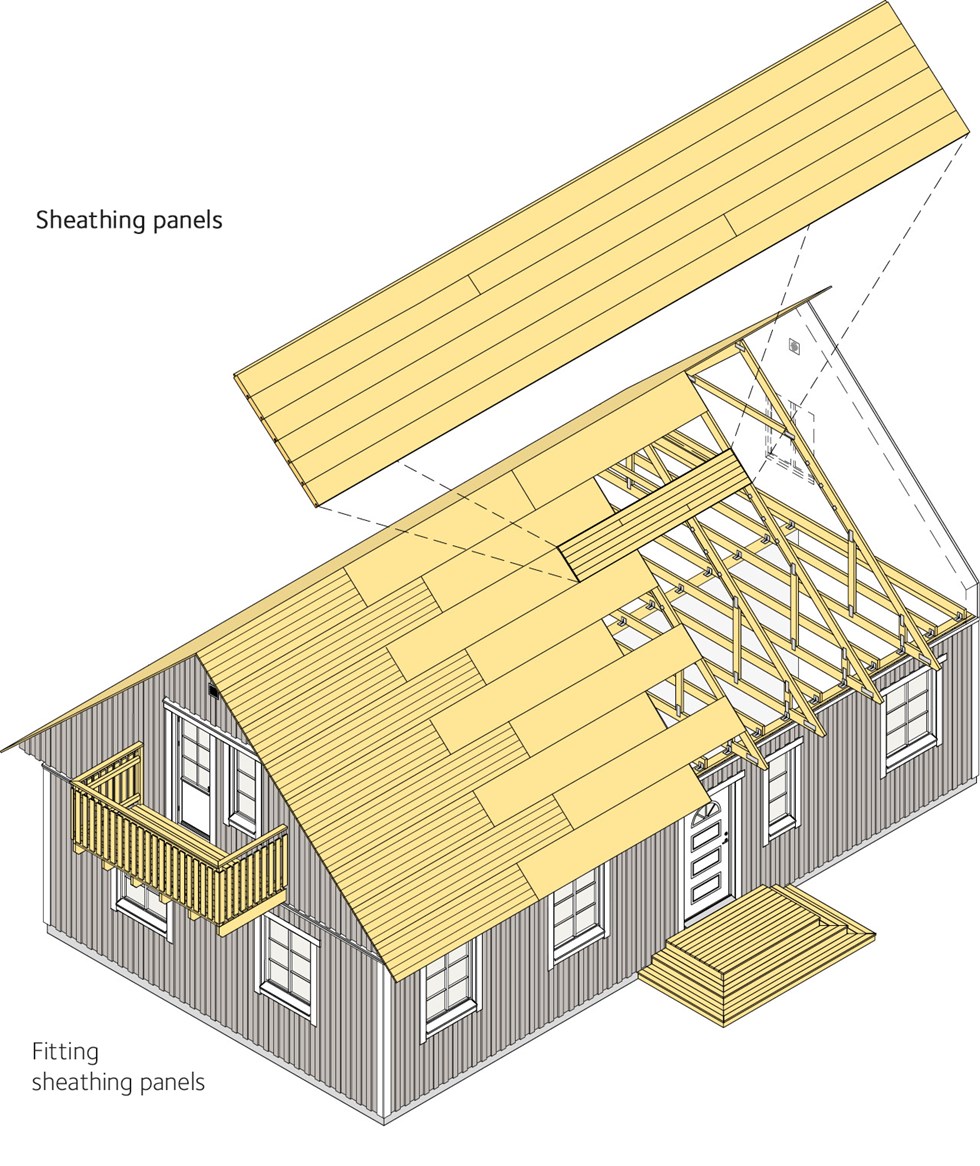 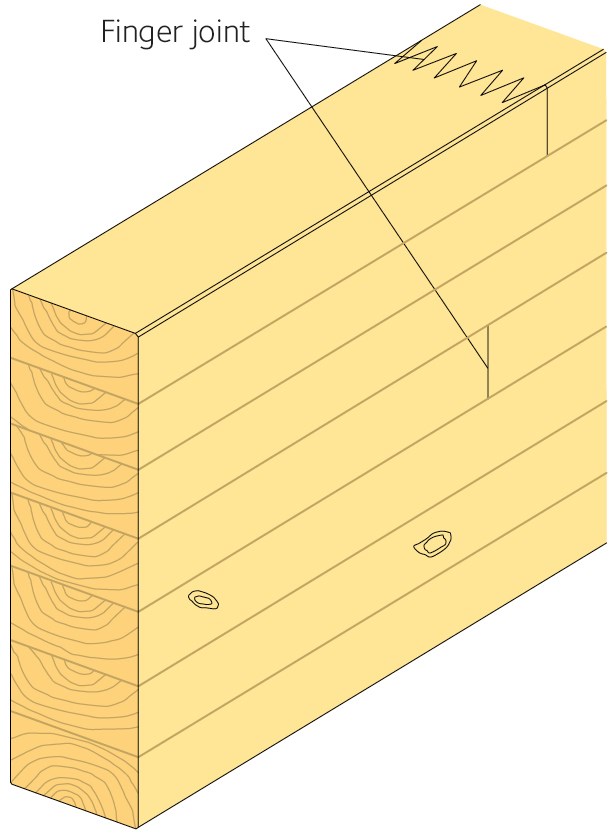 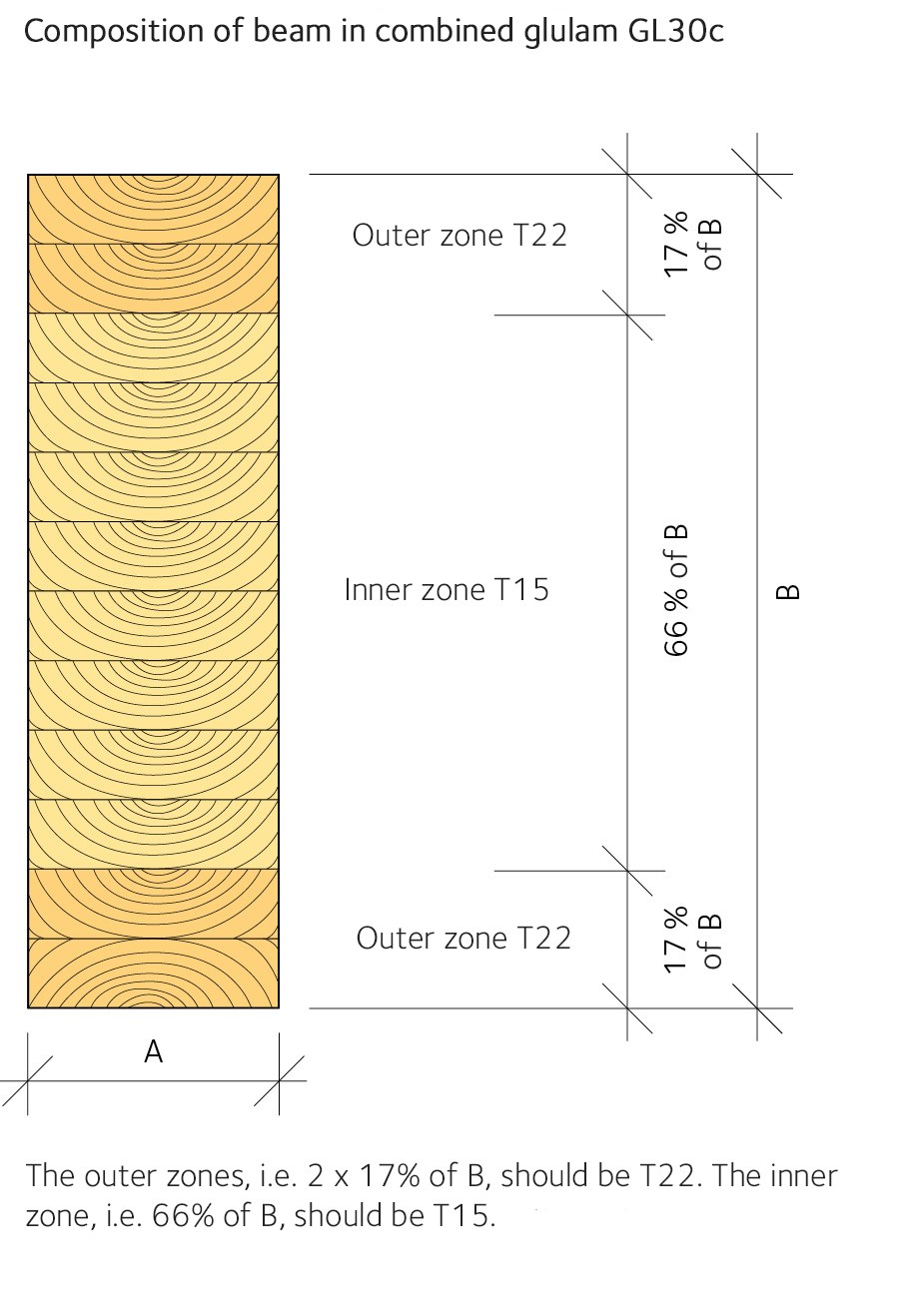 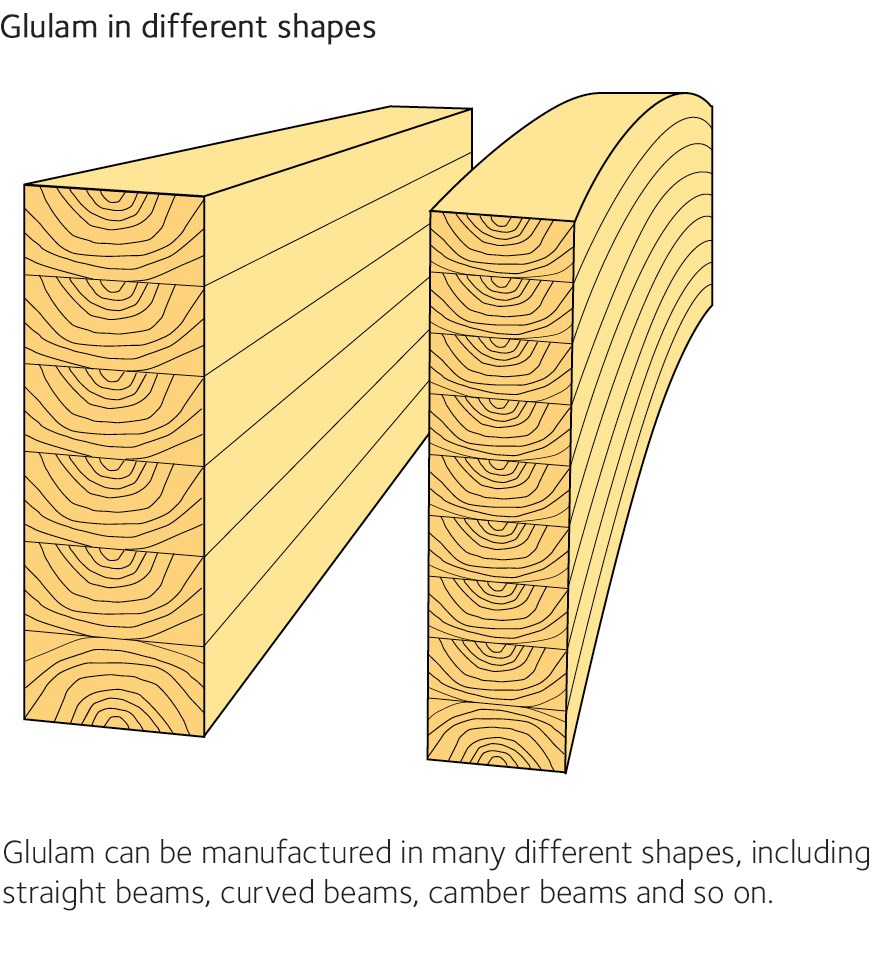 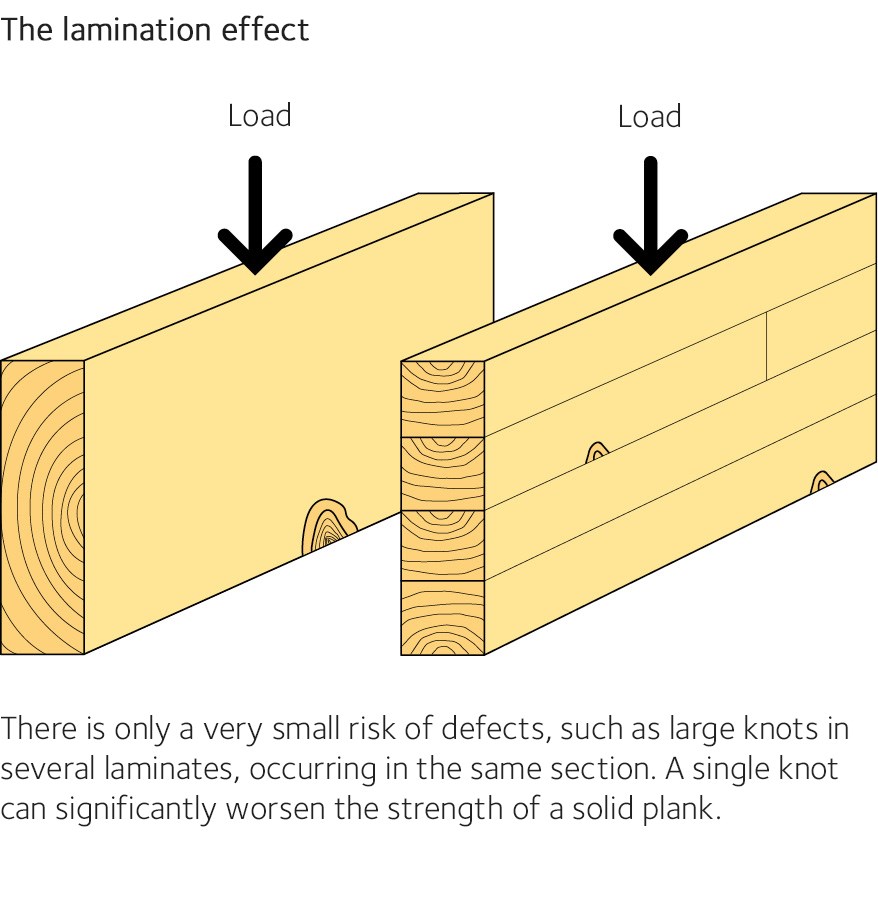 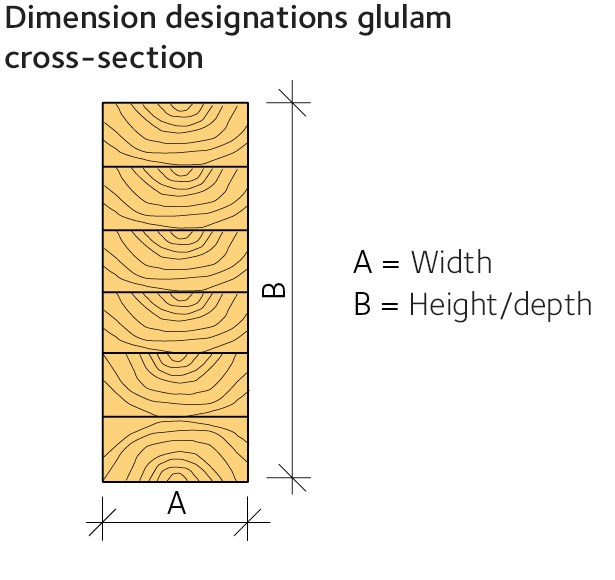 OK/Q8 in Häggvik, Sollentuna. The first filling station in Sweden to have a glulam structural frame. Photo Johan Ardefors. 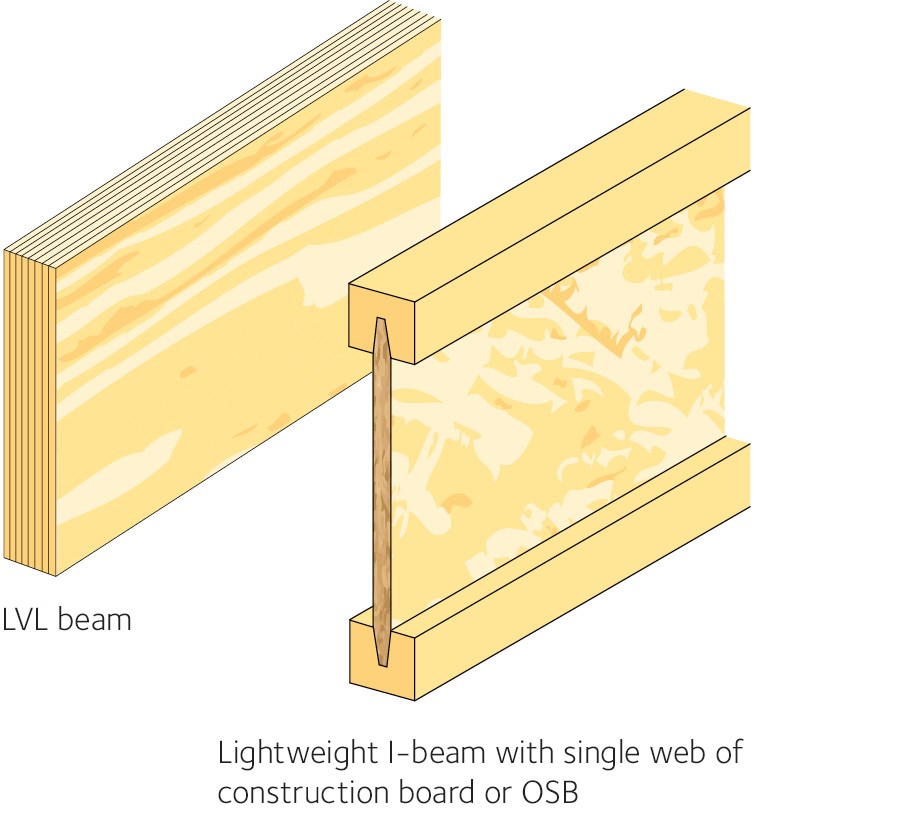 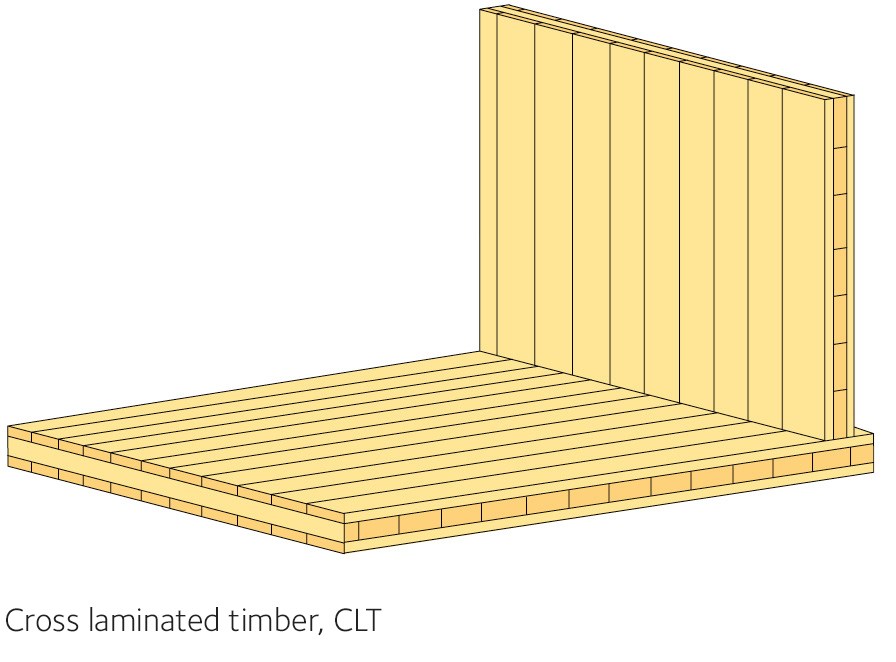 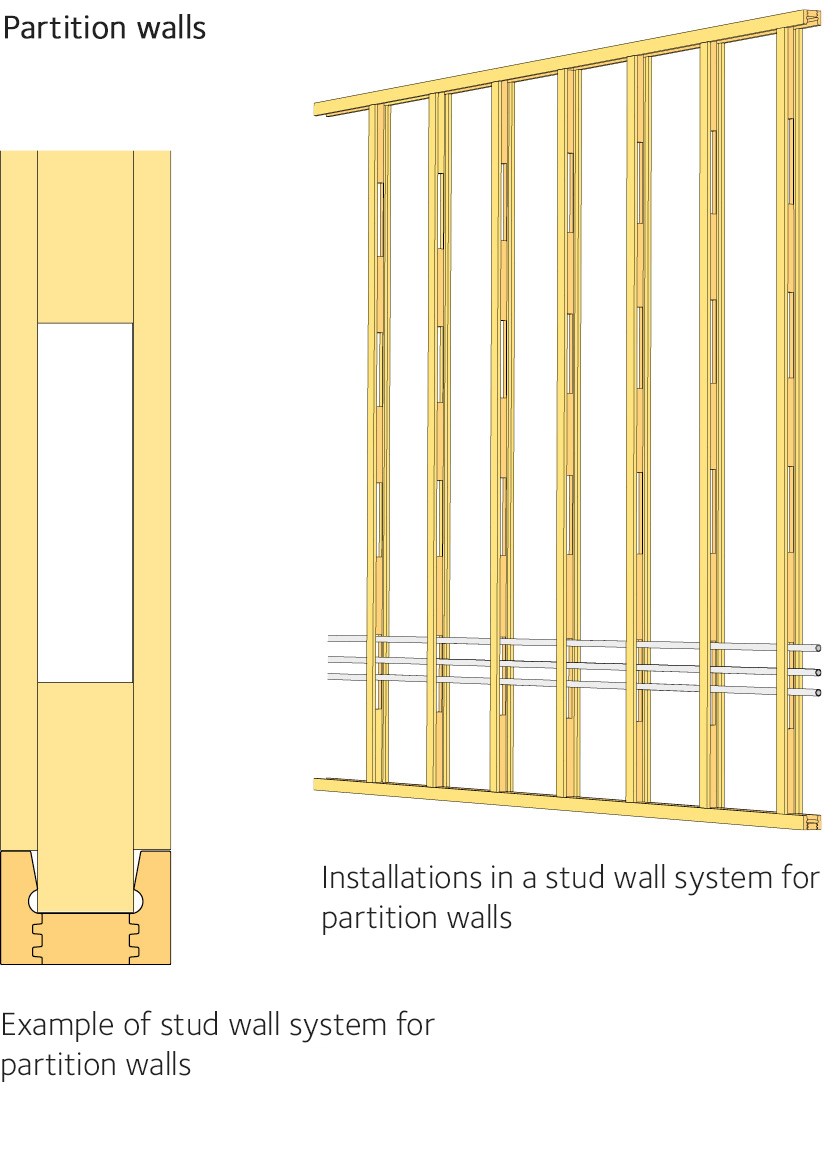 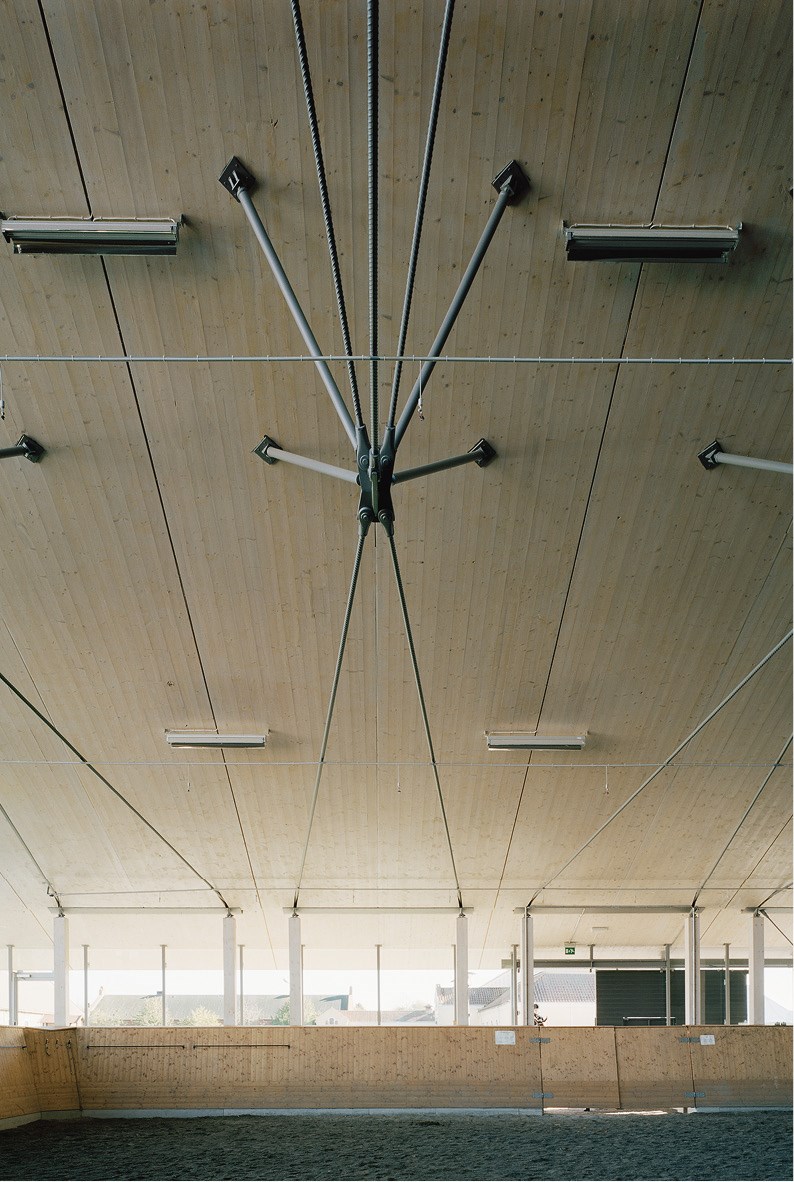