A wooden bridge emits almost half the greenhouse gases from cradle to gate compared with a concrete bridge. Materials and maintenance account for the vast majority of the emissions. This is the conclusion of a comparative life cycle analysis conducted by Tyréns and SP Trä on behalf of TräCentrum Norr (TCN).

“Today’s climate debate places a strong emphasis on the importance of a low carbon footprint for construction and transport. Our study (pdf only in swedish), however, shows that these play a much smaller role than the impact from materials and maintenance. And wood is a runaway winner on these points,” says Peter Jacobsson, development manager at Martinsons Byggsystem, which took part in the LCA study alongside Moelven Töreboda, both of which are represented in Swedish Wood’s Wooden Bridges Group.

The wooden bridge emits 79 tonnes of fossil CO2-equivalents over its lifetime, compared with the concrete bridge, which releases 127 tonnes.

“The Swedish Transport Administration builds over 150 road bridges every year. Then there are all the other types of bridges, plus the ones built by local authorities and the private sector. A bridge project has a considerable carbon footprint, so this is important information for everyone involved in the industry,” says Johan Fröbel, a consultant on wood and glulam products.

The comparative study is based on an existing road bridge (pdf only in swedish) built in concrete on route 1759, Malmövägen, over the Åstorp-Kattarp stretch of the railway line in the municipality of Åstorp. The concrete bridge was recently given a whole new concrete superstructure on the existing concrete foundations.

The study produced data for a superstructure in wood that provided the same level of performance as the existing alternative. The LCA calculations cover the superstructure, i.e. the concrete or wooden deck and its surfacing, railings and other components, plus input materials in specified quantities. The study’s calculations cover everything from cradle to gate: from raw material extraction to the construction of the bridge and its maintenance for the 80 years of technical service life that both bridges are expected to provide.

“This independent report is an important tool in our work and that of the wider industry,” states Johan Åhlén, CEO of Moelven Töreboda. He continues:

“It’s also important to remember that wood construction is something of a generational matter. Younger people in the industry have wood as their go-to material and I’m convinced that this will lead to an even greater breakthrough for wood in the future.”

Emissions of fossil CO2-equivalents vary from project to project so it is not possible to generalise and say that the difference will always be exactly the same as in this study. The results are, however, a clear indication of the benefits of wood when it comes to impact on the climate. 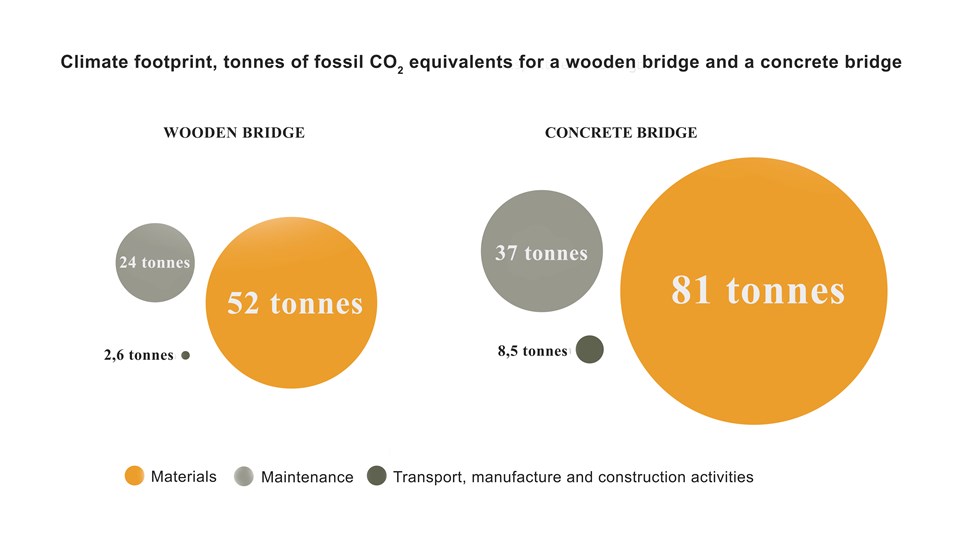