Wood in the construction process 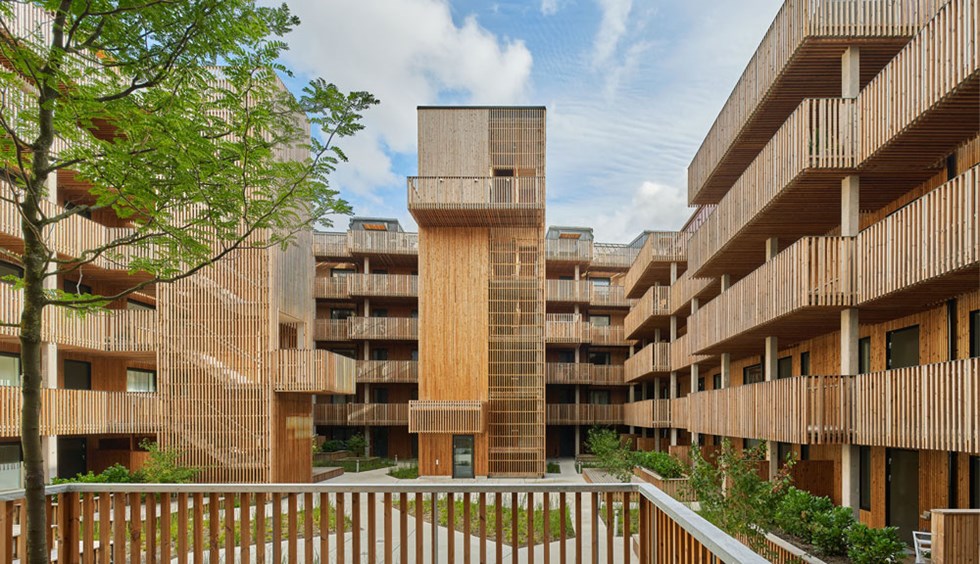 Sweden has a long tradition of building in wood, with our oldest surviving wooden buildings dating from the 13th century. Wooden homes are therefore strongly associated with our cultural heritage. From 1874, a national construction and fire statute limited the use of wood to buildings of no more than two storeys.

Nevertheless, wood continued to be the dominant construction material for individual homes and low-rise apartment blocks, which is why more than half of Sweden’s housing stock is timber-framed. However, the taller buildings of the 20th century – both residential and other buildings – have been built using other construction materials. It was only in 1994, when Sweden became a member of the EU, that a switch to function-based building regulations once again made it possible to construct tall buildings with load-bearing wooden frames that, with new material combinations and technical solutions, delivered the same kind of fire safety as buildings using other materials. And so began a new era of wood construction.

Today’s tall wooden buildings, higher than two storeys, are based on completely different technical solutions to the ones used historically, which is why the term “modern wood construction” is often used to draw a distinction between them. Modern wood construction is rooted in extensive international and national research and development – not on a single national tradition. It began simultaneously across Europe, as the rule change was part of an EU directive, and progress has occurred in parallel on several fronts, with great openness and collaboration. Product development, architecture, materials, construction techniques, structural calculations and new building processes have therefore been developed and shared very quickly.

Modern wood construction is also characterised by a high level of industrial prefabrication and short construction times, while modern IT is widely used in the planning and production process. Altogether, these factors entail a very different process from concept to completion, to the one used in the traditional construction industry. In fact, it embraces the model that other industrial production processes employ, with clearer specification of the product and quality assurance of its performance right from the digital drawing board. Similarly, manufacturing and final assembly make significant use of automation, while also following extremely strict procedures that ensure consistent and correct execution on every project.

The new opportunities of the 1990s to build larger and taller buildings with a wooden frame sparked intensive international material and system development, which has led to today’s modular construction and techniques based around the advent of CLT. The former mainly emerged from Swedish innovations, while cross-laminated timber (CLT) and the construction systems based on the material were largely developed in Central Europe.

Combined with well-established glulam technology, competitive construction systems are now available for all kinds of buildings. Houses, apartment blocks, schools, nurseries, industrial buildings, public buildings, car parks, halls, sports arenas, office blocks, bridges for road, pedestrian and cycle traffic, and specialist structures – modern wood construction actually sees no limits, and where we think such limits might exist, development work is always underway somewhere to make the necessary advances. No wood technology developments are patented, so they are freely available – although they have been standardised for international use.

These rapid breakthroughs are due to the cross-border nature of the work to improve wood construction. The wood industry is international and has therefore always been subject to competition, making it very different from the traditional local construction industry.

Wooden buildings always rely on other construction materials too – there are no wooden solutions for foundations, for example. There are also composite building components, which take the interaction between materials even further, and in the future we can expect to see more hybrid structures that exploit the best properties of each construction material.

For the time being, however, a wooden structure is defined as a building that uses wood for the load-bearing frame. A wooden façade is not normally part of the load-bearing system, and many of today’s wooden buildings conceal the system material from the outside. Conversely, a wooden façade might hang on a building with a different frame material, in which case the structure is not defined as a wooden building.

It has long been known that wood has high strength in relation to its own weight, but the major international interest in wood construction has really been driven by its properties as a renewable material that also binds carbon dioxide (CO2). It is a bio-based material, and that brings with it certain properties that the new research has had to focus on managing in modern wooden buildings. Fire and moisture resistance are two such properties, and acoustic properties should also be mentioned where connections occur.

The risk of fire in built-up areas was the reason why wooden buildings higher than two storeys were banned in 1874, and blazes in 1888, when both Sundsvall and Umeå burned to the ground on the same hot summer’s day, proved that the risk was real. Techniques for stopping city fires may have been around since the 1950s, but they had no impact on our fire regulations. The change that came in 1994 was not primarily a change in the fire regulations, but a move to increase competition within Europe’s construction materials industry.

When the basic research into modern wood construction began, it was therefore natural to start with fire safety. Verification was based on accepted national fire regulations that assume a fire begins in one room. A fire compartment may comprise several rooms. The prescribed fireproofing of the fire compartment’s separating surfaces can be achieved with a load-bearing wooden structure, insulation and plasterboard cladding. Such designs are now verified and accepted across the whole of Europe.

Wood construction is subject to a technology-related fire problem outside the fire compartment, due to the technical solutions for sound insulation. Airborne sound insulation through walls separating apartments and fire compartments is normally provided by an air gap between two separated wooden walls, and a similar solution is usually applied for impact sound insulation in the floor structure. This creates cavities in the structure that have to be sealed or separated with fire barriers. However, this key detail has also been meticulously performance-tested and verified.

Generally speaking, the quality requirements regarding seals of conduits between fire compartments, such as electric cables and pipes, are high when the frame structure contains flammable material. It is therefore a major advantage if these conduits can be cut in an industrial process, instead of on the construction site.

As an interesting side effect, wood construction has generated greater awareness of the need for higher fire safety in all buildings. An examination of potential fire risks in housing stock and all building production throws up certain weaknesses in the current regulations. The clearest is fire penetrating a fire compartment from outside – fire spreading via the eaves to the attic is one example that has been updated and corrected, and the need for better attic compartmentalisation is another. The working practices of the Fire and Rescue Service have also been the subject of research and development.

Modern international research into the development and risk of fire has helped change the approach to fire safety in buildings. Since wood burns at a constant penetration rate, and the material within the pyrolysis zone remains intact and load-bearing, the retained and calculable load-bearing function of the wood material under a fire load is considered a major advantage – compared with a steel beam whose load-bearing capacity is entirely dependent on the fire-proofing insulation staying intact.

As there is no initial drying-out time for a modern wooden building, all supplementary treatments can take place immediately. A timber frame will see some drying during the first year, particularly in internal walls and floor structures, where the moisture content will drop below 10%.

A basic examination of the issues surrounding moisture can be found in the chapter Moisture in wood.

Moisture in exterior structures – including façades – is an area that has been thoroughly analysed and described in several handbooks, including the Swedish publications Handbok för träfasader and Fuktsäker utformning av klimatskiljande byggnadsdelar med fuktkänsligt material, developed as part of the WoodBuild research project. Temporary canopy to protect against the weather when building a timber-framed apartment block, Sundbyberg. 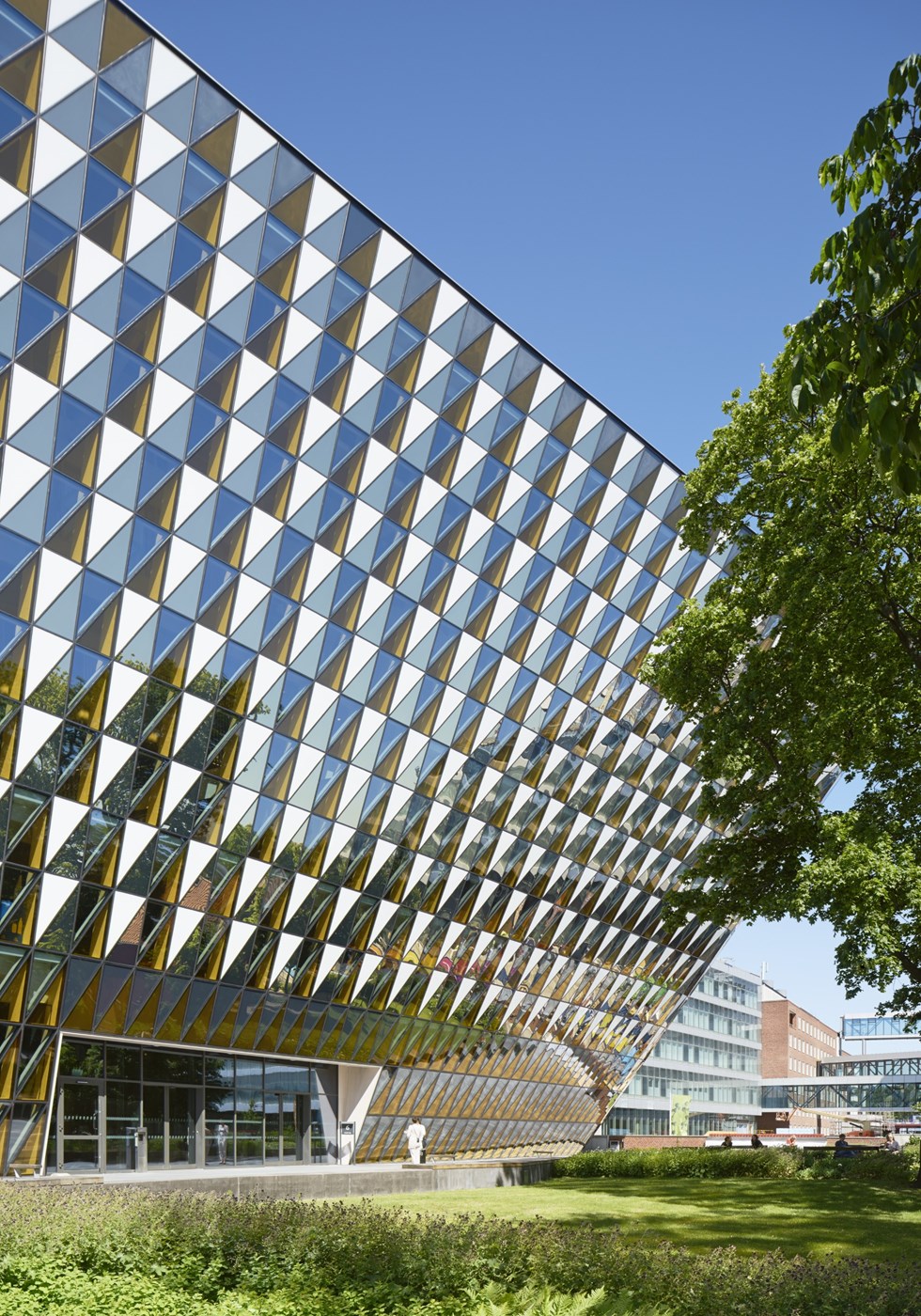 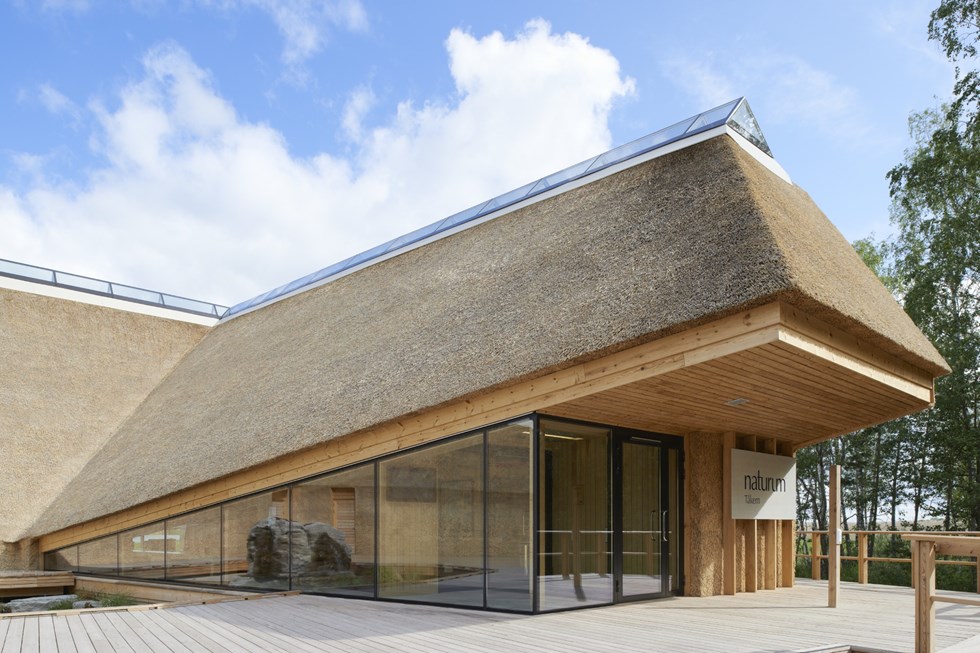