Home › Building with wood › Construction › The future is growing on trees

The future is growing on trees

Thanks to industrial construction in wood, we can now build faster, better and more cost-effectively than ever before.

A multi-storey building in wood can be ready to move into just 10 weeks after the foundation slab has been cast, thanks to prefabricated modules that are craned into place and assembled together.

Wooden bridges are another example of the superior technical and economic potential of building in wood. A wooden bridge can be prefabricated, transported and installed on site in sections that are practically complete, with just the road paving to add.

Lightweight construction techniques in wood are also the most modern way to tackle densification in the big cities. Wood is incredibly light compared with other traditional construction materials, which is of major importance for rooftop extensions. With lightweight construction techniques in wood, housing can be built on top of existing buildings, in wedges between two buildings, and on ground that was not previously considered viable. Many local authorities have already discovered the potential that this offers. It is not surprising that industrial construction in wood is considered the building method of the future!

Modern wood construction systems are based on our only renewable construction material. With well-managed forests, wood is an infinite resource.

It is not surprising that industrial construction in wood is considered the building method of the future!

Wood built this attractive block
It doesn’t always show on the outside, but wood is now the most common material for the structural frame in newbuild housing in Sweden. There are major savings to be made by using modern industrial construction techniques. Since the modules are prefabricated off-site, a five-storey building can be assembled in just 10 weeks, once the foundation slab has been cast. A prime example is this four-storey building with a wooden structural frame in Nynäshamn outside Stockholm.

Build on the roof – keep it light
Modern wood-based construction systems are ideal for “vertical densification”, which entails adding extra storeys onto existing buildings. Wood is also a suitable construction material for buildings that are wedged into the spaces between two other buildings, and for renovations and extensions. Lightweight construction techniques in wood can allow building on ground with a lower load-bearing capacity, with the foundations costing less than with other construction systems. A good example of vertical extension is these exclusive townhouses in wood from 2010, which have been built on top of an existing four-storey building from the 1960s in the Tegeludden district of Stockholm.

The trend curve for industrial construction in wood is inexorably moving upwards.

Volumetric units, also known as modules
Parts of, or whole, rooms that are prefabricated off-site and then transported and craned into place on the construction site. The volumetric units are almost entirely completed in the factory, with features such as washbasins and wallpaper, as well as plumbing and electrical cables all in place. The technique is particularly well suited to multi-storey buildings, student accommodation, schools, retirement homes, and so on.

Panels
These may be external wall units, floor structures or internal wall units. They are often completed to the stage where all they lack is a surface layer and certain installations. The panels may be manufactured using lightweight construction techniques, or using cross-laminated timber (crosslam or CLT). The crosslam technique really comes into its own in taller buildings and buildings with large spans.

Glulam
Glulam comprises a number of wood laminates bonded together with adhesive. It is designed for load-bearing structures. As well as being one of the strongest construction materials in relation to its weight, glulam has a lasting aesthetic value. Glulam is therefore often used for exposed structural frames, for example in halls, public buildings and bridges, but also as a structural material in multi-storey buildings. 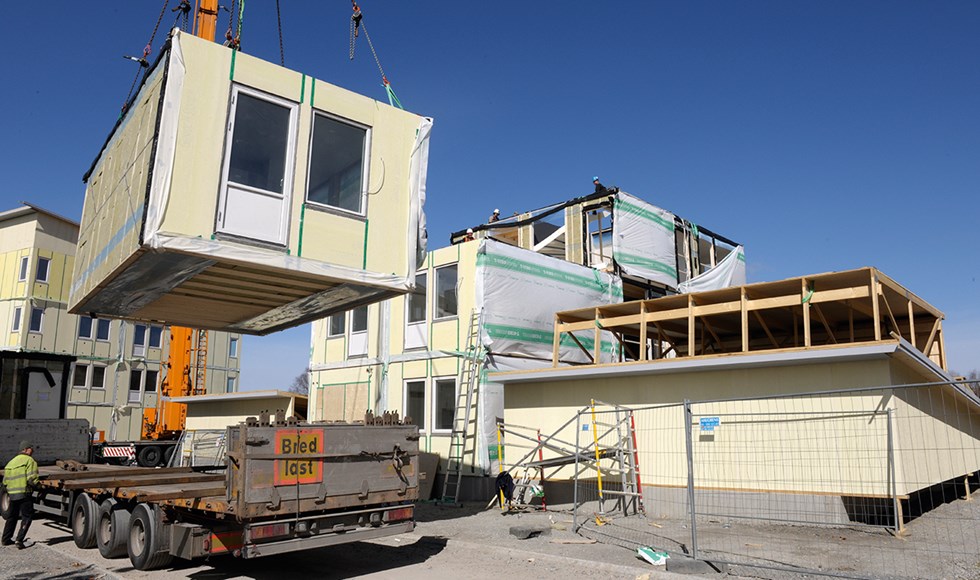 A volumetric unit comes loaded and ready for assembly.

Limnologen in Växjö, constructed in 2008, is an eight-storey apartment block built from panels. 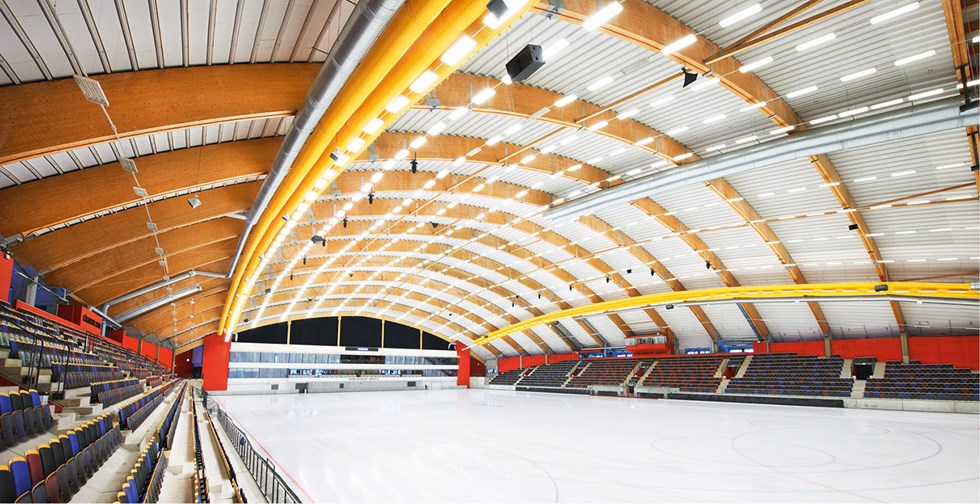 Glulam is one of the strongest construction materials, allowing for large spans with no posts blocking the view, as in Göransons Arena in Sandviken, built in 2009.