Wood is Sweden’s most traditional building material. Since wood is widely used in construction – for structural frames, exterior and interior wall cladding, fittings, floor coverings, formwork and scaffolding, the list goes on – it is important to understand how wood behaves under different conditions. Due to their own specific properties, each type of wood has typical areas of use.

Spruce is the wood of choice for construction timber. Pine is commonly used for joinery, mouldings and internal cladding, although spruce may be used. Hardwoods such as oak and beech are used in flooring and furniture.

Material properties vary between the different wood species. Even within the same wood species, there are major variations between trees grown in different locations, but also between different trees grown in the same location. There is, however, even greater variation within a single tree; for example between different heights in the tree, between wood that is close to the pith and to the bark, and between springwood and summerwood in the individual growth rings. Knots and other fibre distortions (peculiarities) also affect the wood’s technical properties.

Normal variations for the properties of density, strength and stiffness within the same wood type with an undistorted fibre structure:

Due to the variations in the wood, the quotient is greater between, for example, the average material strength of wood and allowable working stress in comparison with other construction materials.

Technical data for pine and spruce is presented in table 6 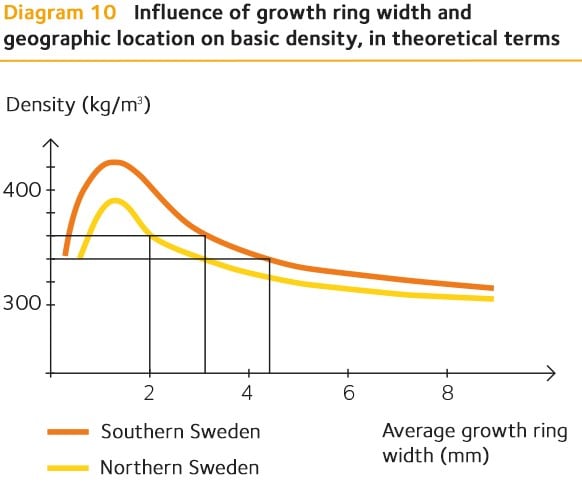 The values for strength and modulus of elasticity are average values, and refer to small test samples, with no imperfections, at an average temperature of 20°C.

All the values relate to wood with 12% moisture content.

In spite of the differences between pine and spruce, they should be considered equal in terms of building statics.

Note When calculating load-bearing capacity and stiffness, use the characteristic values stated in Eurocode 5, plus the associated national annex Boverkets författningssamling, BFS 2019:1 EKS 11.

The composition and structure of the tree

Pines and spruces have a similar composition. In the centre of the stem’s cross-section sits the pith, which runs through the whole tree and terminates at the top with a bud. The pith is enclosed by the wood, which can be divided into the heartwood and the sapwood, which is closest to the bark. The cells in the heartwood are dead and some have been clogged up with resin, which means that they can’t carry water and thus have a relatively low moisture content, 30–50%. The sapwood’s cells are also dead, except for about 5–10 percent, which are the nutrient-carrying parenchyma cells.

Since the sapwood’s cells are not clogged with resin, they are able to carry water and dissolved nutrients from the roots to the needles of the tree. The moisture content of the sapwood varies from 120–160%. Outside the wood lies the vascular cambium, which is the stem’s growth layer. The vascular cambium produces wood cells inwardly and bark (cork) cells outwardly. The vascular cambium is encased with the bast (phloem), which is often referred to as the inner bark. This layer transports nutrients (carbohydrates) down through the stem and distributes them to the living cells in the tree’s branches, stem and roots. The bast is connected to the pith via medullary rays, which are living in the sapwood but dead in the heartwood. The outer bark encases the whole stem, providing protection from water loss and various parasites. See also fig. 28.

The conifer tree’s wood comprises 40–45 percent cellulose, around 20–22 percent hemicellulose and just under 30 percent lignin (adhesive substance). There are also 2–6 percent extractive substances in the wood. The vast majority of these are resin acids, fatty acids, carbohydrates and minerals (ash).

90–95 percent of the wood is made up of long, hollow cells that scientists call tracheids, but the forest industry calls fibres. These cells are about the thickness of a hair and vary in length between 0.5 and 6 mm. The other cells are shorter, with thinner walls.

During the growth season, new cells are formed in the vascular cambium. The cells that are formed in spring and early summer are short and relatively wide, with thin walls. This means that the basic density is low, at around 300 kg/m3. The summerwood cells, which form during the summer months, are 20–25 percent longer and have much thicker cell walls than the springwood. The thicker cell walls mean that the summerwood cells are around three times heavier than the springwood cells, with a basic density of around 900 kg/m3. Due to the differences in density, the springwood appears as a lighter ring than the dark summerwood.

The way the growth rings develop is determined in part by the climate during the growth season. The growth rings therefore tend to be narrower and have thinner bands of summerwood in colder climates than in warm ones. As such, it is possible to see indicators of good and poor growth years, and how the conditions for growth have been affected by different silviculture measures. Growth improves after thinning due to better access to light and nutrients, and conversely growth can fall if a tree has grown too close to other larger neighbouring trees.

The width of growth rings and the proportion of summerwood varies within the stem.
In the inner part of the stem, in the juvenile wood near the pith, the growth rings are often broad with thin summerwood bands. The density is therefore low in the wood near the pith, compared with the mature wood further out along the radius of the stem. This is the case along the whole length of the tree.

The growth rings are narrower, with broader summerwood bands, in the outer parts of the stem, particularly in the lower logs. The proportion of summerwood is thus higher, which gives the mature wood a higher density and strength. The lower parts of the stem need to be stronger to resist the stresses of wind and snow. The density is therefore higher in a butt log than in a middle log or top log.

Wood is an anisotropic material, which means that the properties differ in different directions. For example, wood is considerably stronger in the direction of the fibres (cells), i.e. following the length of cells along the stem, than at right angles, across the grain. This is the case whether the load is caused by compression, tension or flexural stresses in the wood.

The fibre direction deviates from the direction of the forces at knots and when the fibres are not parallel with the edge of the wood.

Fractures may be gradual or brittle. A brittle fracture is sudden and occurs without warning. A gradual fracture is preceded by some form of warning, such as major distortions or cracking sounds in the wood. Generally speaking, gradual fractures, which account for most fractures in wood, are preferable.

The strength of the wood depends on how the stress occurs, giving the following correlation: 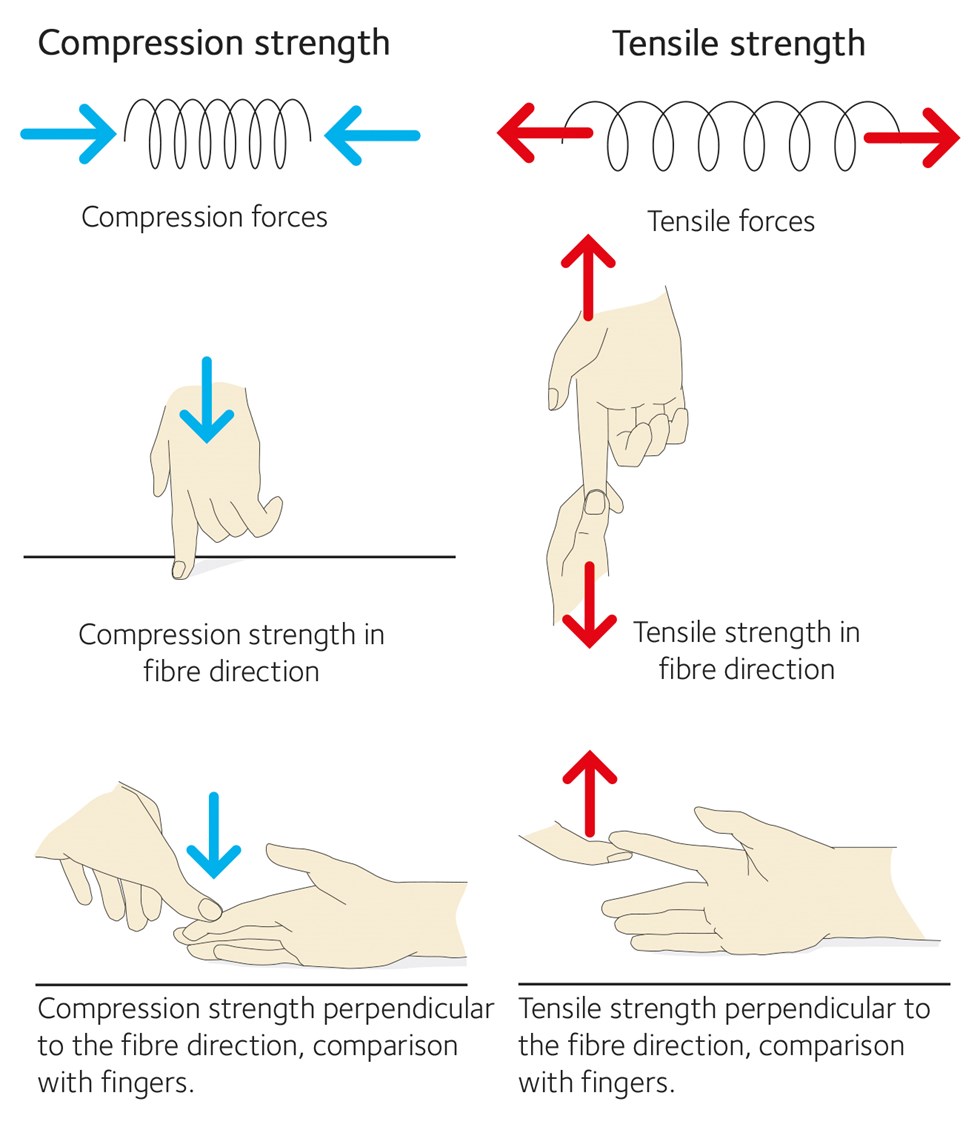 The wood’s strength cannot be fully used up around the fracture limit, so lower levels of stress have to be chosen. This is due to the way the wood’s properties spread so widely, which means that safety margins have to be built in. Assessments like these underpin the values on strength that are stated in the Swedish building regulations BFS, 2019:1 EKS 11.

In terms of strength, pine and spruce are treated the same, and they are normally judged to have the same strength values:

Hardness refers to the ease with which a surface is damaged by external pressure, for example heels on a floor or knocks on a table top. The hardness of wood is greater with the grain than against it. End-grain flooring, for example, is hard and durable, as the surface is entirely end-grain wood.

Apart from the direction of the fibres, the hardness of wood depends primarily on the density. In wood flooring, the springwood therefore wears more quickly than the summerwood. A wood with a high density should thus be chosen for flooring.

Wood has good thermal properties and solid wood has been used historically as a thermal insulation material. Thermal conductivity is greatest in the direction of the fibres, and increases with the moisture level and density.

The thermal capacity of wood is relatively high at around 1,300 J per kg °C for absolutely dry wood.

The effective thermal value of pine and spruce as a fuel is 19.3 MJ per kg dry substance. Compare table 6.

Numerous factors affect wood’s burning properties: primarily moisture content, dimensions, density and fibre direction. The time until ignition can vary greatly and depends on thermal radiation, ventilation and the presence of a naked flame. The lowest thermal radiation for the ignition of wood with a naked flame is approx. 12 kW/m2. Higher levels of thermal radiation are required for ignition without a naked flame. Wood cladding with a thickness of ≥ 18 mm (≥ 12 mm without air gap behind the wood cladding) meets fire resistance classification D according to the European surface classes in standard SS-EN 13501-1. Burning wood only generates moderate amounts of smoke.

Wooden structures have good fire safety properties. Wood chars slowly and below the charred surface is normal wood, which retains its original properties. The charring rate is around 0.5–1.0 mm per minute. Larger dimensions and protection of the wood’s surface can enhance a wooden structure’s fire resistance.

The load-bearing capacity of wooden structures in a fire can be worked out mathematically.

1)  Does not fall into class E and must not be used in buildings under Boverket’s Building Regulations (BBR).

Density is a piece of wood’s mass divided by its volume, expressed in kilos per cubic metre. For wood this is usually stated as the basic density or for a particular moisture content, e.g. 12%.

Basic density is defined as the mass of the dry wood sample divided by the volume of the fully hydrated wood sample. The density varies from wood to wood, within the same type of wood and in different parts of the same tree.

Fig. 26  Composition of a pine tree

Fig. 27  Transport of water and nutrients in a tree stem

How can you tell pine from spruce? 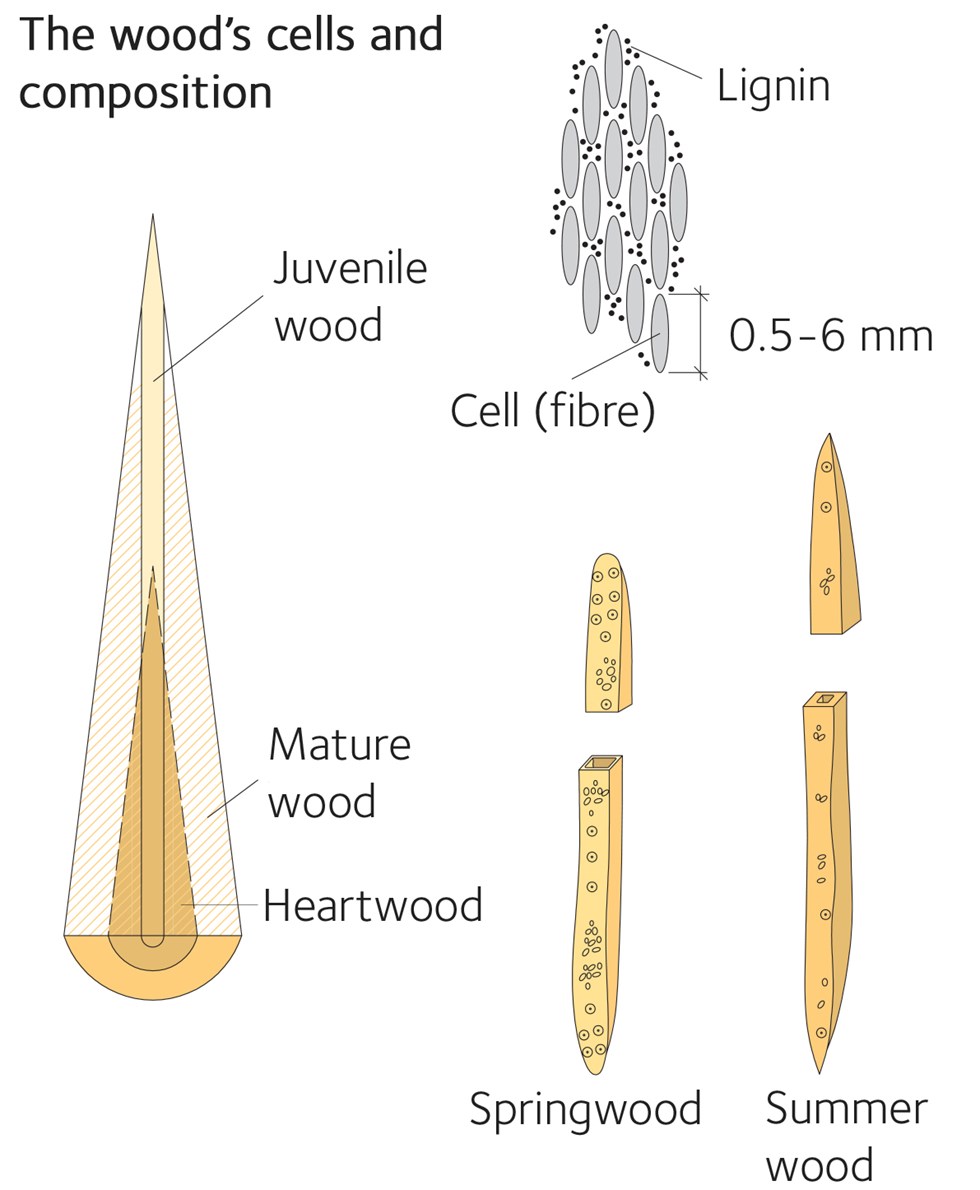 Fig. 29  The wood’s cells and composition 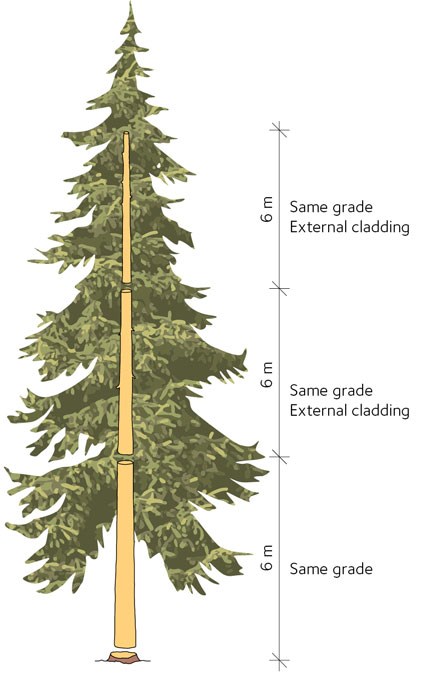 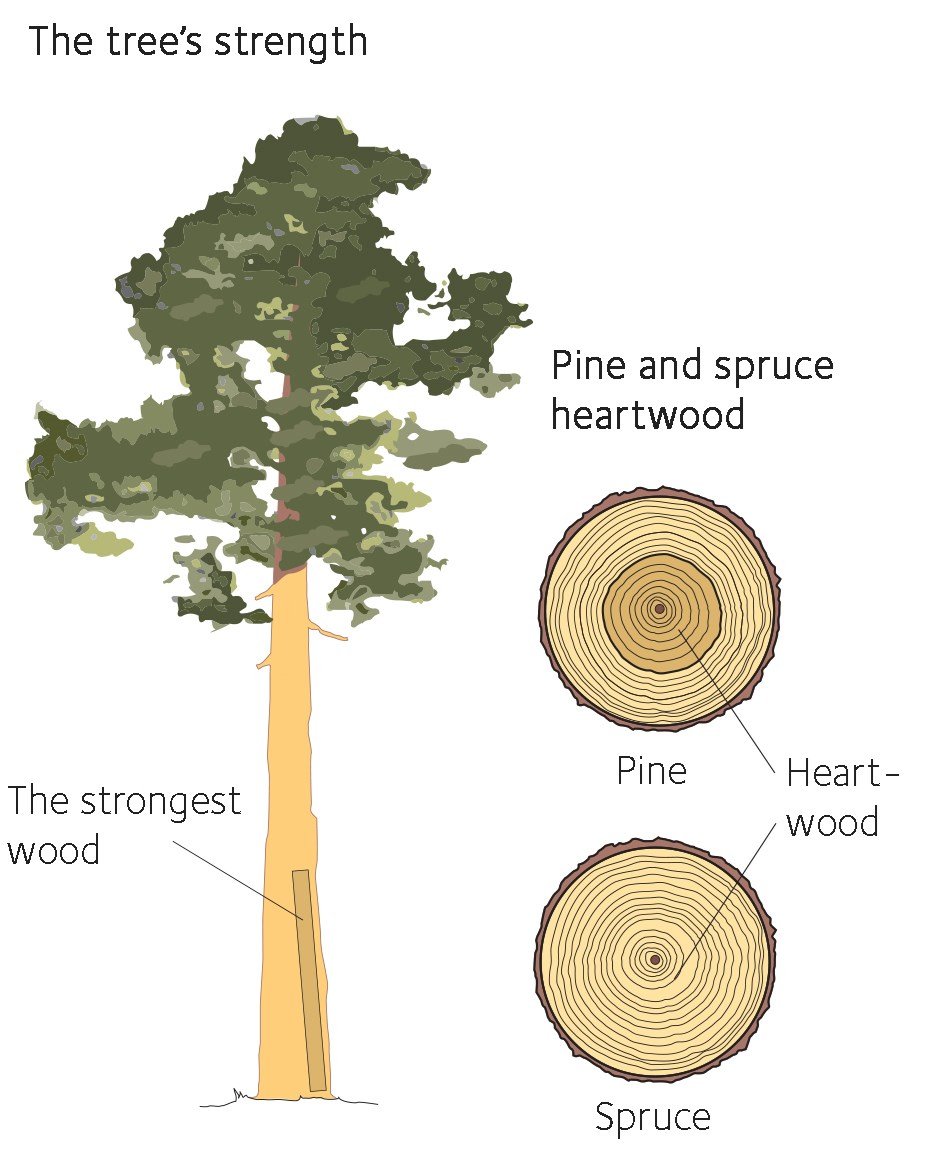 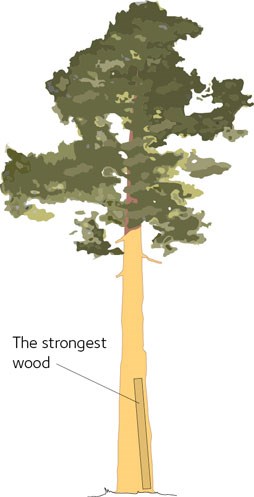 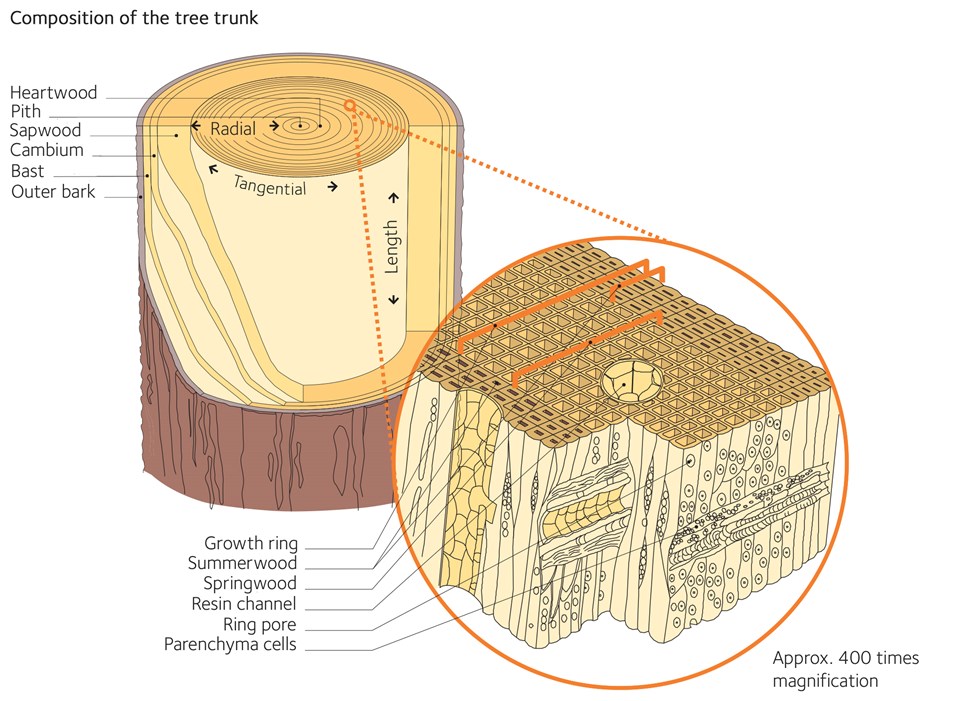 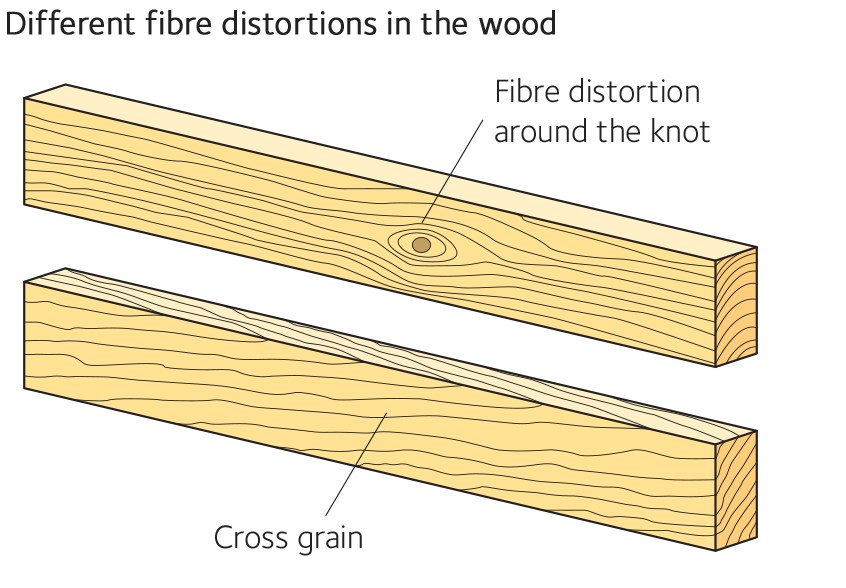 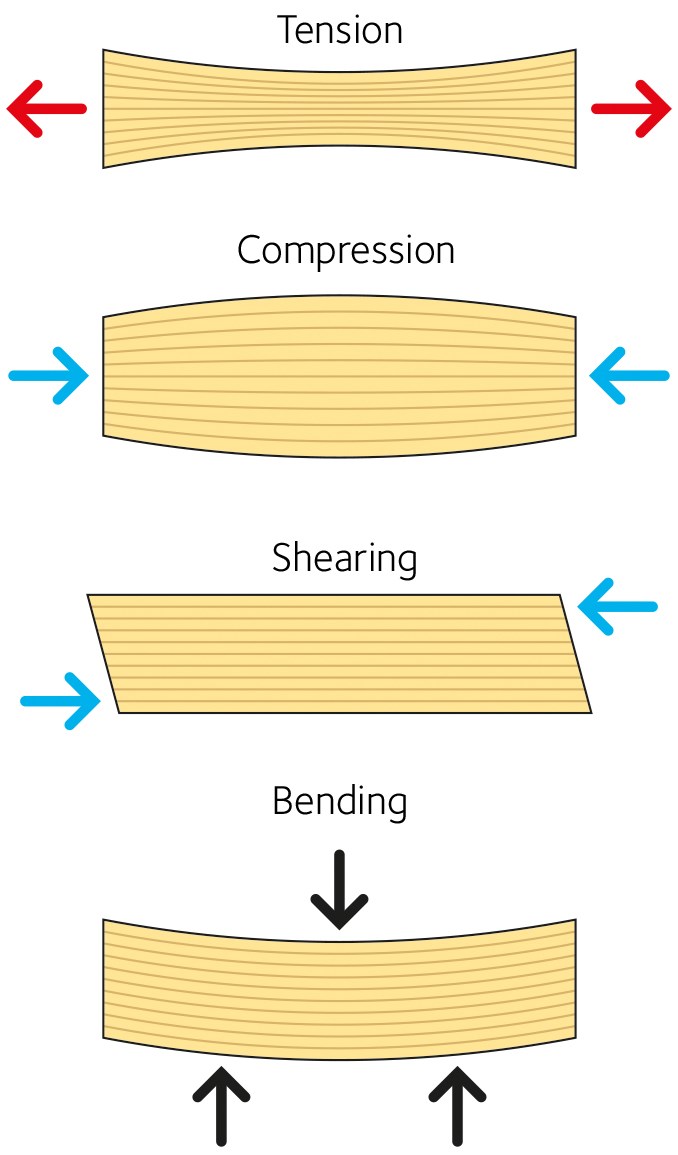 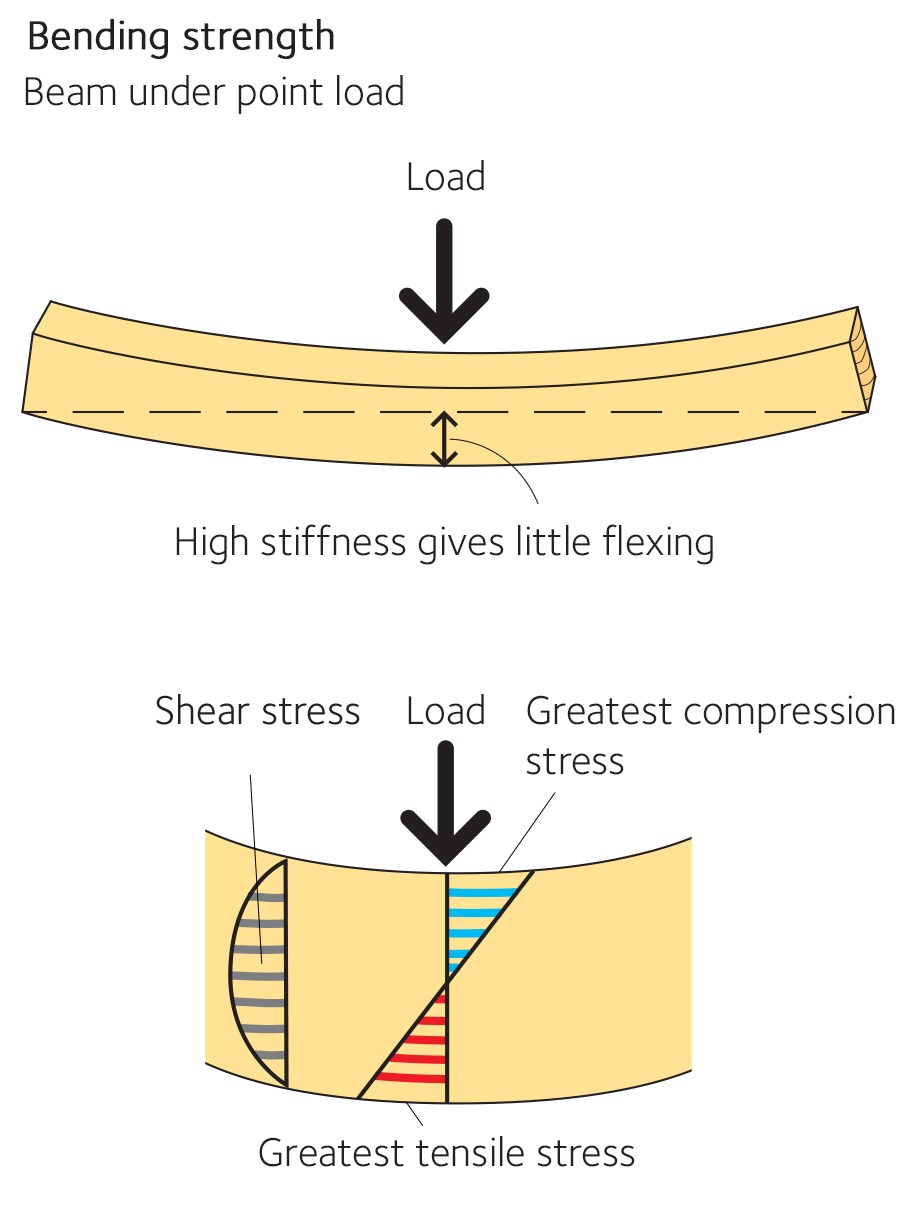 Fig. 40  Vertical grain Edge-glued panels and glulam panels are usually made from wood with a vertical grain for good dimensional stability.

Load-bearing wooden structures should be designed, built and checked in line with Swedish building regulations BBR-BFS 2011:6. 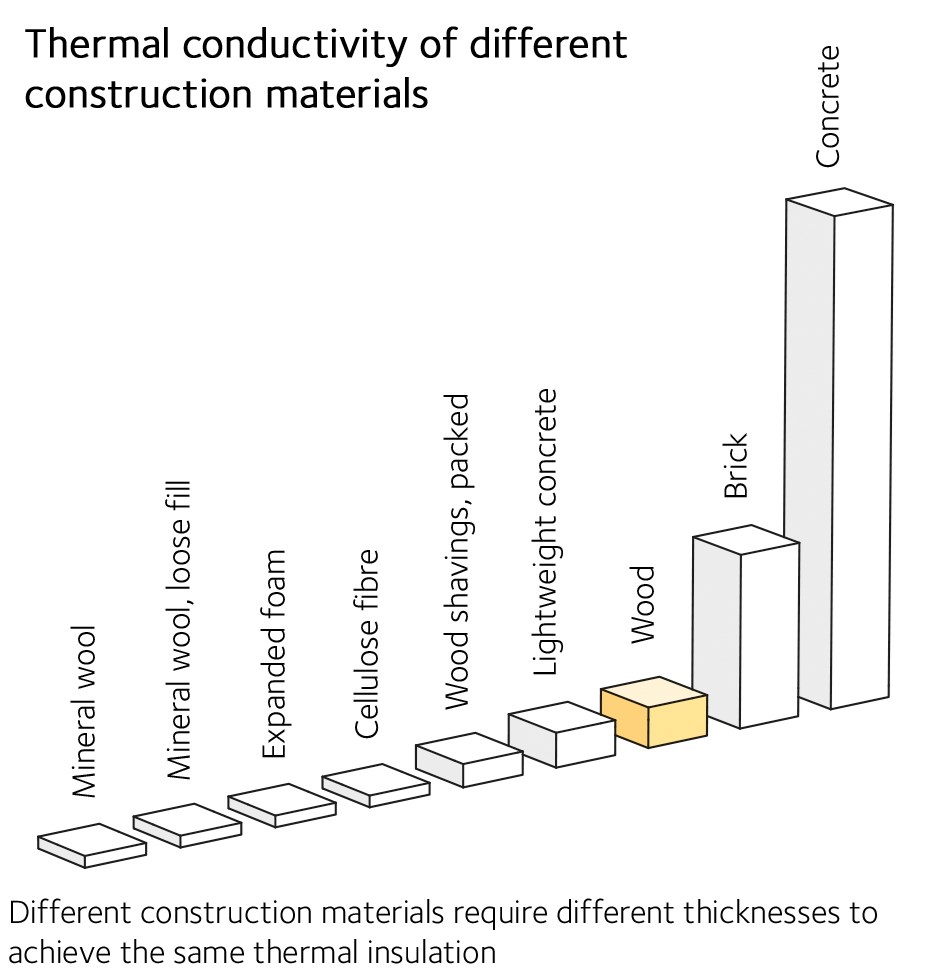 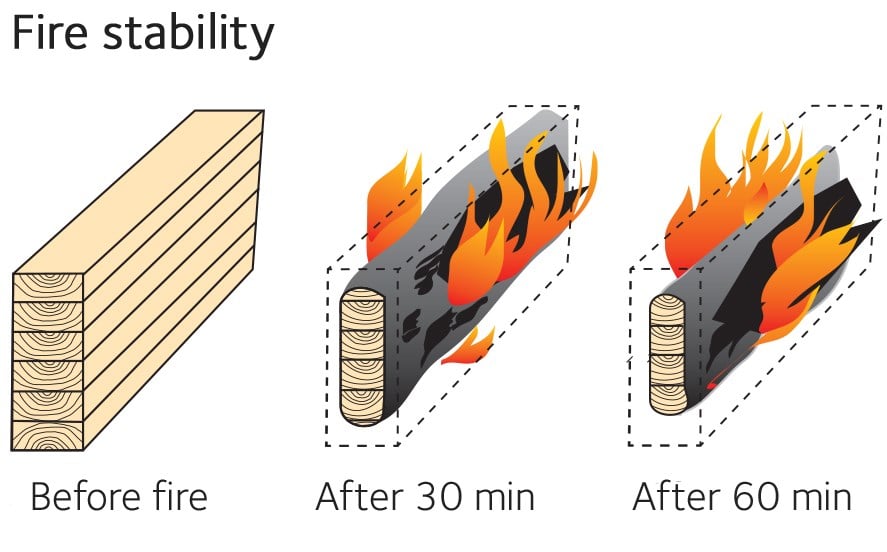 Fig. 42  Fire stability
Wood retains a significant load-bearing capacity even during a fire, not least due to the protective charred layer that forms on the burnt surface. The figure shows a glulam cross-section before the fire (left), after 30 minutes of fire (centre) and after 60 minutes (right) with the fire attacking from four sides.

Fig. 43  The phenomenon of the charring process 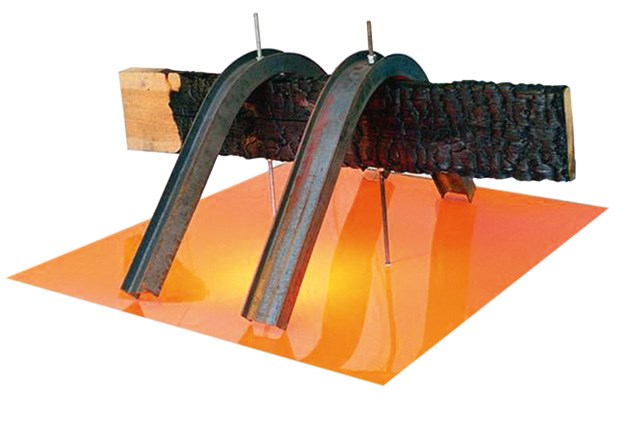 Wood retains its load-bearing capacity in a fire, in contrast to unprotected steel.