The forest and sustainable forestry

In less than 100 years, Sweden’s forest assets have doubled. And since the felling rate is less than the growth rate, the volume of forest continues to increase by a net annual increment. 70 percent of Sweden’s land area is covered by forest, primarily coniferous forest. Deciduous forest only dominates in the far south.

All the forest in Sweden can be defined as cultured forest, which means forest that is cultivated and managed. Only the northernmost mountain regions have areas of virgin forest, areas that have not been affected by agriculture or silviculture. These are called natural forests.

Of the forest harvested in Sweden, around 45 percent goes to sawmills, 45 percent to the pulp industry and 10 percent becomes firewood, poles and so on. Forest raw material can be found in a wealth of products that one might not ordinarily associate with wood, such as dishcloths, clothing, fuel and medicine. 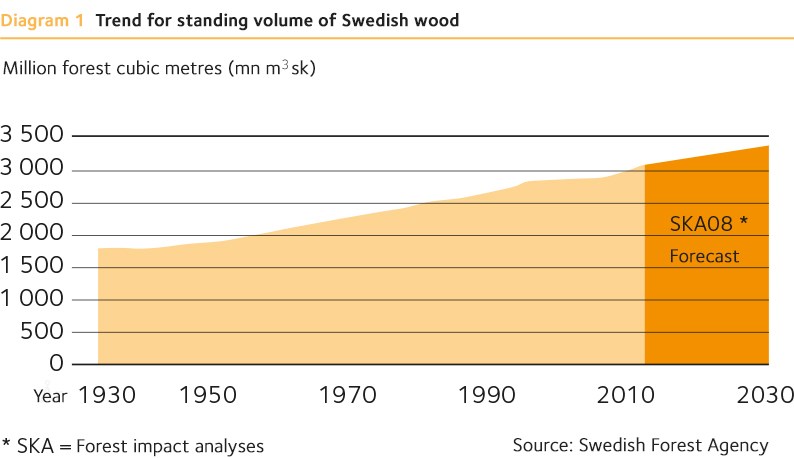 The volume of wood comprises 42 percent spruce, followed by 39 percent pine, then 12 percent birch and 7 percent other deciduous trees (see diagram 3). The distribution of tree species is not the same everywhere in the country. Pines preferred dry, poor soil while spruces go for rich, damp and fertile soil. Pine forest therefore dominates northern Sweden and the island of Gotland, while spruce forest is most common in the southern part of the country. The closer you get to medium quality soil, the greater the mix of different tree species. Birch, aspen and alder can be found across the country, while deciduous trees such as oak, beech, elm and ash only grow in the more southerly provinces.

Forest can be regenerated in various ways, but there are two main types: planting or natural regeneration. With the seedling planting method, clearfelling is carried out on one occasion. This method tends to be suitable for most soils except the very driest. Natural regeneration may be chosen by those who are confident about good prices in the future for high-quality wood of large dimensions, and where the soil is particularly suited to this. This method, however, requires a great deal of expertise on the part of the forester, and it is only really suitable on dry and certain richer soils.

Tables 4 and 5 show how a forest owner’s objectives and view of the future can affect the management of a pine forest on medium quality soil in mid Sweden. The timescale is somewhat shorter in the southern part of the country (60–80 years) and as much as double in the far north (up to 150 years). The quality of the wood can be influenced by the choice of regeneration method, and through silviculture measures such as cleaning and thinning. In today’s forestry, there is often a drive to achieve stands of the same age. The branches will usually be bigger in sparse stands than in dense stands.

Growth is increasing more in southern Sweden than in northern Sweden, primarily due to the longer and warmer growing season in the south. Only using the width of the growth rings to determine the quality and properties of the wood can be misleading, since the geographical place of growth and local soil conditions also affect the properties.

The concept of social sustainability encompasses issues such as aboriginal populations, workers’ rights, recreational issues and opportunities for society, at both local and national level, to survive on its forestry in the long term.

Biological sustainability refers to the land’s long-term production capacity, preserving the natural ecological processes and a current hot topic in Sweden, the preservation of biodiversity.

Sweden has sustainable forestry that is subject to legislation requiring nature conservation and replanting. All harvested forest must be regenerated either through planned planting or by leaving trees that naturally produce seeds and new seedlings. In addition to the forestry legislation, there are also voluntary international forest certification systems, under which forestry is verified through so-called third-party certification. The two systems used in Sweden are FSC and PEFC. These are both international systems for forest certification, and around two thirds of Sweden’s productive forest land is certified in accordance with these (see diagram 6). 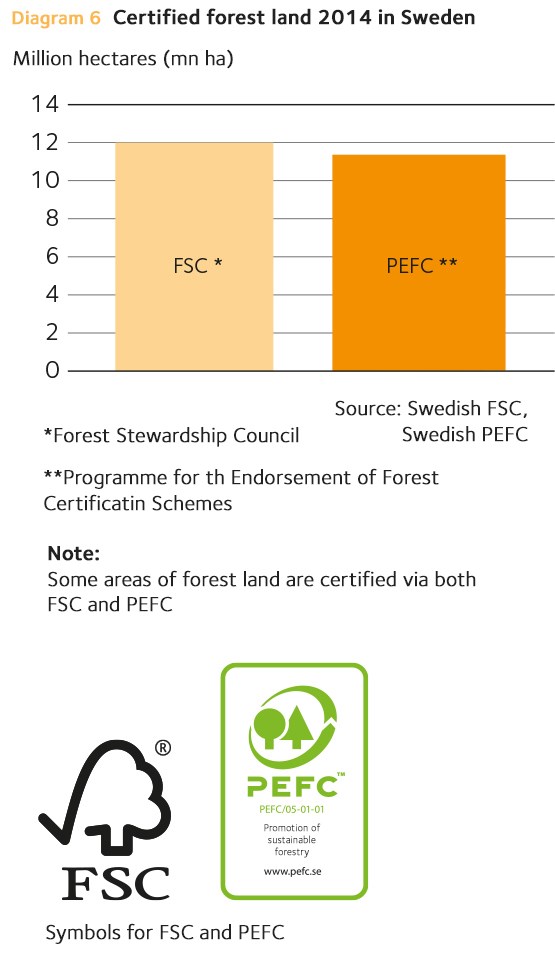 In order to ensure that no one uses illegally felled wood, the EU has voted on a law against trade in such wood, known as the Timber Regulation.

The absorbed carbon from the carbon dioxide is bound in the wood and continues to be stored in the products made from the wood. If the wood products are used in buildings, the carbon is stored for a long time. The stored carbon is only released when the products are incinerated at the end of their life. During incineration, the converted solar energy is released as heat, making the process entirely climate neutral. In our Swedish cogeneration plants, the biomass ends up as heat and electrical energy when the bound carbon dioxide is released.

Directly after felling, the cleared area leaks carbon dioxide as needles and discarded branches decay. Once the new trees reach a little over 20 years old, they are able to absorb more carbon dioxide than is leaking from the ground. The trees are harvested in maturity and then processed into products that are able to replace products and energy sources that are harmful to the climate. Making use of the forest is therefore good for the climate.

Photosynthesis, the world’s most vital formula. 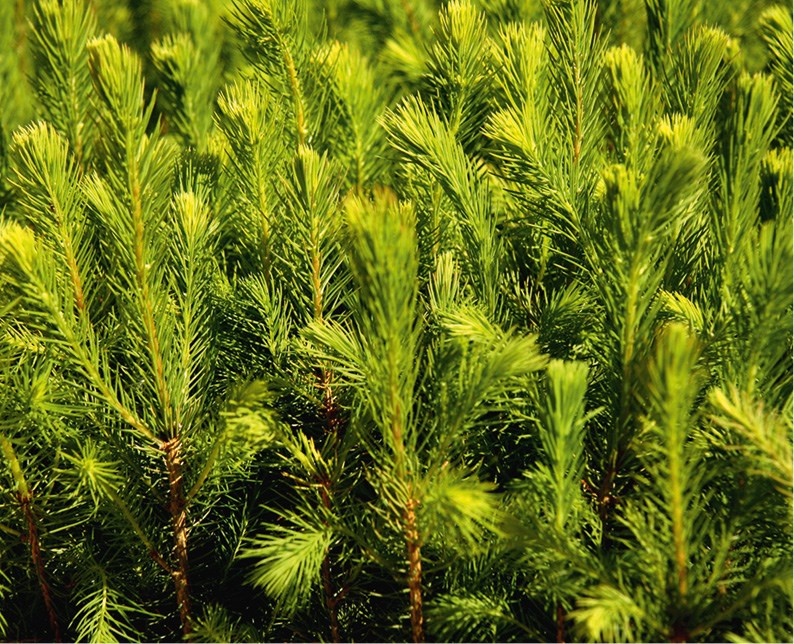