“It has been important to develop an English version that can be read and understood by more people. Having grading rules that are interpreted in the same way by sellers and buyers is essential for reliable communication, negotiation and contract writing,” states Johan Fröbel, Head of Technology and Distribution at Swedish Wood.

The new rules were drawn up by Swedish Wood and Svenskt Trätekniskt Forum, along with Suomen Sahateollisuusmiesten Yhdistys in Finland and Treindustriens Tekniske Forening in Norway. They are based on previous grading rules and test gradings. The values in the previous rules have been carefully reviewed and revised, based on current production and market conditions.

“With the market gravitating toward new grading technology, more customer-specific products and greater proximity to the end customer, there is considerable demand for a clear rulebook on commercial grading of timber,” explains Tomas Ivarsson, Secretary of Svenskt Trätekniskt Forum.

Commercial Grading of Timber, the English version of the publication Handelssortering av trävaror, was launched in March 2020. The English version comprises 84 pages in A5 format with over 100 illustrations, drawings, tables and photographs. The handbook can be ordered via the online shops of both Swedish Wood and Svenskt Trätekniskt Forum.

Background
Swedish Wood and Svenskt Trätekniskt Forum, plus two independent grading experts, began the task of developing the handbook Handelssortering av trävaror in 2018. The new rules are based on a number of test gradings, and they differ from the previous rules in areas such as permitted number of pieces with splits, knot size in sixths, wane in sixths and certain compensation rules.The new rules are now available in both Swedish and English, in the publications Handelssortering av trävaror and Commercial Grading of Timber.

The images may be used for this article. Please write Swedish Wood. 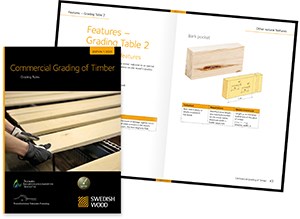 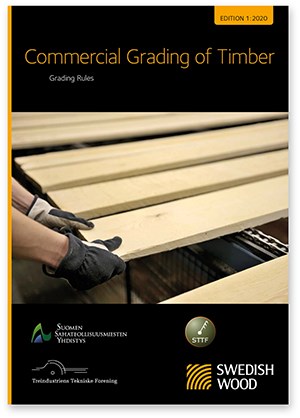 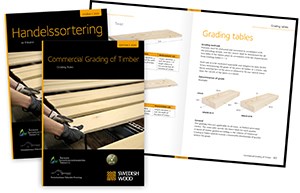 Director of Technology and Distribution johan.frobel@swedishwood.com +46 8 762 79 68